You know you can’t fly close to an airport with your drone, but what about taking it on a plane? What are the rules? Let me explain…

Before I get started, let me get an old Samuel Jackson joke about that snake movie out of the way. And…done! 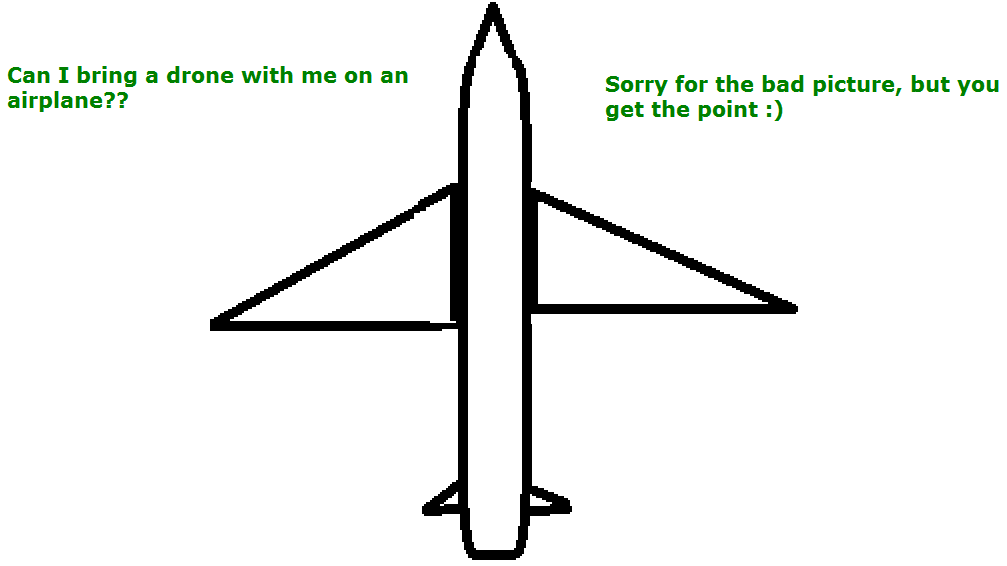 Let’s talk about drones and airplanes.

I will show you through the following 8 tips. Here they are:

1) You are allowed to take a drone on an airplane. However…

Be sure to check the rules and regulations of both…

Generally, airlines in most western countries are pretty open about taking drones, but on the off chance that something may happen or questions may be raised, check your exact airlines rules and if it’s not listed on their website, call them up.

Also if you live outside the U.S and you have a security to go through, check with them as well to be sure.

The key is to really be a good, safety concerned citizen and if the airline and security at the airport sees you followed all the regulations (which there are a few off), there will be less chances you have problems when getting on board.

In fact, as drones become more and more popular to bring on trips, security people at airports are getting more and used to seeing them.

2) You have the option to bring your drone as a carry on, or check it with your bag.

I personally would prefer to bring it on board. If you have an expensive model, the last thing I want is for it to be in a bag that gets tossed with the other luggage.

Provided you are taking an airplane that has enough space for your model to be fit into the overhead storage, you should be fine, but if it’s a large one, check with the airline to see which plane you’ll be flying in and if there’s enough space to put it on.

Try to get a case for your drone that’s both good enough to protect it and small enough to be put into the overhead storage if need be. As I recommended, check with your airline to see if there’s enough space.

From what I have heard, Southwest and Jet Blue are pretty good about this. But even so, let them know and ask them just in case.

Note: I am uncertain about weight limits that are allowed, but most of the mainstream models should be fine. Check with the airline JUST in case.

5) Your model’s lipo batteries absolutely must be brought as a carry on, no exceptions.

If there is one major rule you NEED to abide by, it’s that the batteries which run your model must… 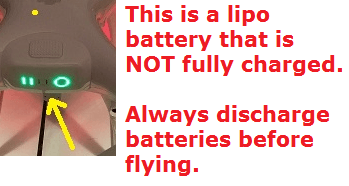 That latter rule is just as important. Never bring a FULLY charged or 40% or above charged battery on board. The thing that makes this rule SO important is that lipo batteries are VERY susceptible to cabin pressure.

This means that if they are charged enough, stored in the actual baggage area of the plane and the cabin pressure drops quickly enough for whatever reason, they can explode.

This is why they need to be brought as a carry on, because the cabin pressure there is stable. 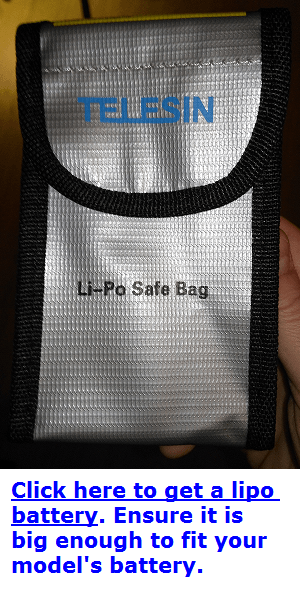 People, it’s a flight we’re talking about here, where everyone’s safety is on the line, so do NOT play around with this.

Discharge the battery at ALL costs. Otherwise, you will not be let on the plane.

6) To further improve safety even more…

Take the battery OUT of the model and whatever batteries you are bringing (that should ALL be discharged as much as possible) and put them in a special lipo bag like this (right).

This ensures that even if on the off chance something happens and they act up, the lipo bag seals anything that will happen, meaning the flight will be even safer.

7) Check with the country you’re going to so that they do not seize your model. Big point!

Within several countries, such as the U.S and I believe Canada, you should not have issues bringing in a drone, but if you fly into a country which has very strict drone laws, you MAY face a custom import tax, a seizure of the model and may even have pay a HEFTY fine or possibly even $1,000’s to retrieve your model.

This is NO joke, it has happened and will happen if you’re not careful. If you’re flying to ANY country outside the U.S, absolutely check with them and ask how they deal with drones and what the protocol is.

I have seen several YouTube videos on this manner where a person who went to for example, Mexico had their Mavic Pro seized and had to circle around the negotiations to get it back, lest they paid $1,000’s as a fine.

Another person who was flying into the Philippines discovered they’d have to pay a fine on the drone prior to even bringing it in, BUT by calling up the airport organization that controls the airspace in the Philippines (In the U.S, we call that the FAA), he discovered  that he merely had to request and fill out a special form to be granted permission and avoid paying the fine.

8) Be very polite with security and the airline.

Keeping the following rules in mind, go forward with confidence and be polite to security and the airline if they ask you questions. If they see you did your research and are doing your part to make the flight safe, they will be less likely to give you problems and it rarely happens to begin with as UAVs in general are becoming more and more popular to travel with anyway.

Don’t be a fool and go into the airport blind on the rules. I imagine wherever you fly to, bringing your model to explore it further is something that gives you joy, but that joy can quickly flip on you if you’re not careful.

You are after all flying on a plane and beyond all else, safety is most important.

My personal experience taking a drone on a plane:

While I had known about all the major rules of drones and planes prior, I had taken my Mavic 2 Pro model with me on a Jetblue flight to Las Vegas, and then on another flight out of Seattle.

Both times, I had no issues with TSA or the bringing the drone with me as a carry on.

I only had 1 battery for my Mavic 2 Pro, and discharged to about 10%. I also took it out of the drone as well. When I was placing it to show to TSA at both airports, none of them even asked me about it.

14 thoughts on “Can You Take a Drone on a Plane? Follow These 8 Rules.”