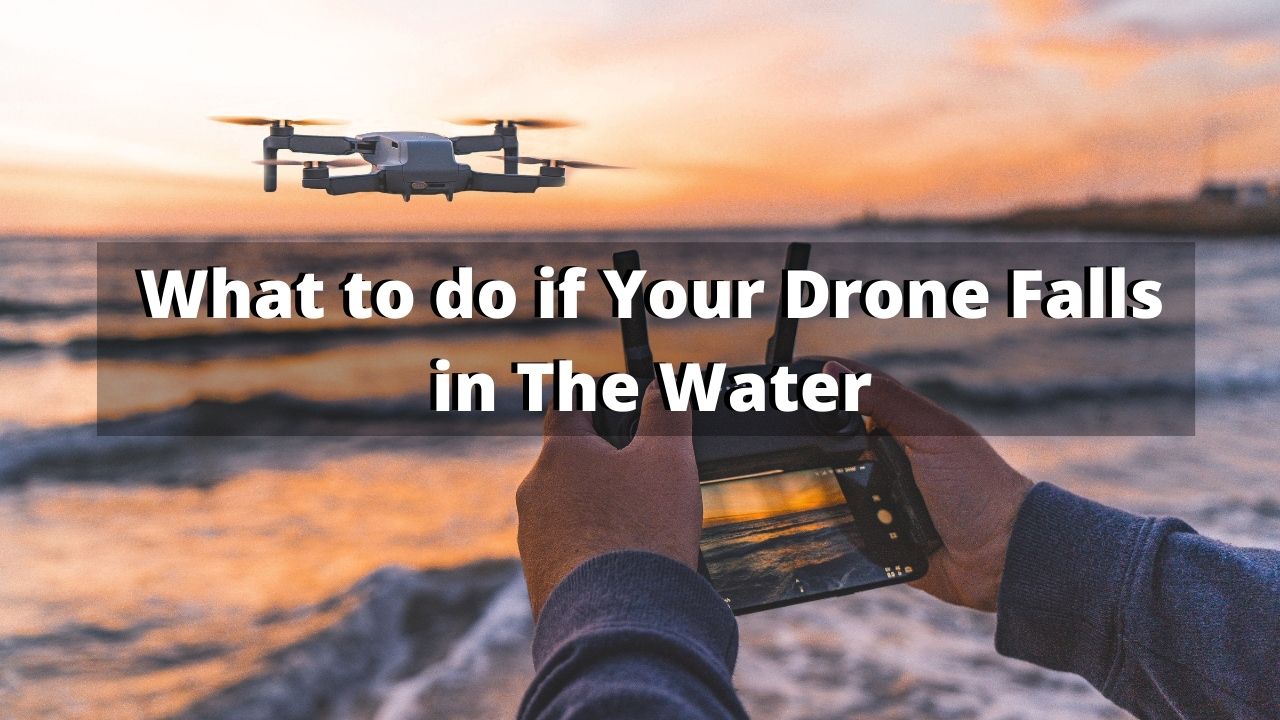 One of the worst types of crashes a drone can experience is if it fell in the water. If that happens, is it completely over or is there a chance or a rescue happening where it can actually fly again? Well the answer can actually be yes if you do the right things.

And that’s what we’re going to look at. If you go on YouTube, and look for videos of drones falling the water, let’s just say there’s plenty of cases where this happens and most of the time, drone crashes happen because of piloting mistakes.

Never the less, I have seen recoveries happen post accident when it comes to this and there have been some cases where a drone was lost in the water for hours if not over a day and was able to make a full recovery and fly again.

It IS possible for this to happen. So let me give you tips on how:

Any electronic device that is not waterproof is obviously going to suffer in some way if it falls into the water.

In the case of drones and it falling into water, here’s when there’s a 0% chance of recovery:

If it ever falls into salt water, you will never be able to get it to fly again. Salt water is the enemy of electronics, so if you already had this happen, I would just get another drone, or:

So while I endorse that you try to use these recovery tips I’ll be giving you, know that if it has to do with salt, you’re more than likely not going to see it happen. If it’s in fresh water (pool, lake, river, anything without salt basically), then there’s a chance.

It’s not great, but it is possible..

2 ways to recover the drone if it falls in water (fresh water, not salt water):

Timing is seriously critical here. The faster you can get the drone out of the water, the more likely the odds are it’ll fly again. Although I have seen rescues and flights of drones after hours or even a day underwater, time is your best friend here should this situation occur.

So one you recover it, do this:

1) Place the drone in a box and fill it up with rice:

Rice happens to be one of the BEST absorbents of water and you don’t even need to open your bird up, the rice will take care of pretty much everything in that it will adsorb the moisture. I would leave your bird in rice for at least 24 hours before attempting to fly again.

Also before doing so, clean it with a cloth so there’s no rice “dust” on it. Here is a video where this happened to work (This happened to a Mavic Pro model):

2) Leave it in an area where the sun shines on it (not too hot).

This is a more rare circumstance in that it has less chances of working, but you’ll find a lot of people won’t be comfortable with placing their bird in rice, so in that case, there’s this option.

You just literally leave it on a porch or in an area where the sun can shin on it for hours. The only problem here is that the light won’t be able to get into the deep areas of the bird and dry those up, which is why I suggest the rice option because it WILL absorb the moisture in the deep areas without you actually having to open up the bird.

Here is a case where a drone was underwater for an hour, and this method worked:

And in this case, it happened to a Mavic Pro 2 model. I happen to own both of these things (and the first Mavic) so I’m glad to see these situations resolve, it gives me some relief to know if it happened to me that there’s some way to fix it. But of course, not everyone has these models, but in either case, rice is GREAT for maximizing the odds of recovery, even if those odds are small.

Other than these 2 tips, which are pretty much the only ones you have when it comes to this situation, the other thing to keep in mind is…have insurance.

Places like State Farm and DJI offer their own drone insurance plans that can really give you a safe feeling when flying so if this particular situation happens or something else goes wrong, you’ve got another chance to fly again.

Of course the other tip I have to offer is about avoiding this problem from happening. Like I said earlier, most pilots who get into this mess do so because they aren’t experienced and just do foolish things like this:

1) They don’t set the home point near themselves.

2) They fly in areas where there’s no GPS, so that triggers atti mode to hit, increasing the odds of accidents.

3) They try to fly in open areas such as the beach (salt…) and risk flying way too far in water. I’ve seen even the most experienced pilots make this mistake. Lack of accidents happening, make a pilot cocky and willing to take more risks and that’s how it goes wrong eventually.

4) They try to fly on a boat or land on it, and if it’s in the sea, guess what? Waves will crash and probably get your drone wet.

Really the only time it’s not the pilot’s fault is if the model they are using is poor (that makes it tough to pilot or control) or there’s some technical bug that occurs during flight, which is rare for good models.

Either way, with these things in mind, here’s what you now know:

You now know the basic safety tips and I have more here to avoid this from happening (again):

These 3 things will hedge you against potential and post accidents that can occur.

Overall, I get the appeal of filming in risky areas, I do it too and I’ve had A LOT of close calls, that’s how I learned about all of this, but others aren’t as lucky and sooner or later, it may happen to me.

Either way, if you’re going to fly in a risky area, like over water, just make sure you’ve got you’re covered in some wy, whether it be with intelligent piloting skills, or insurance should things go bad.