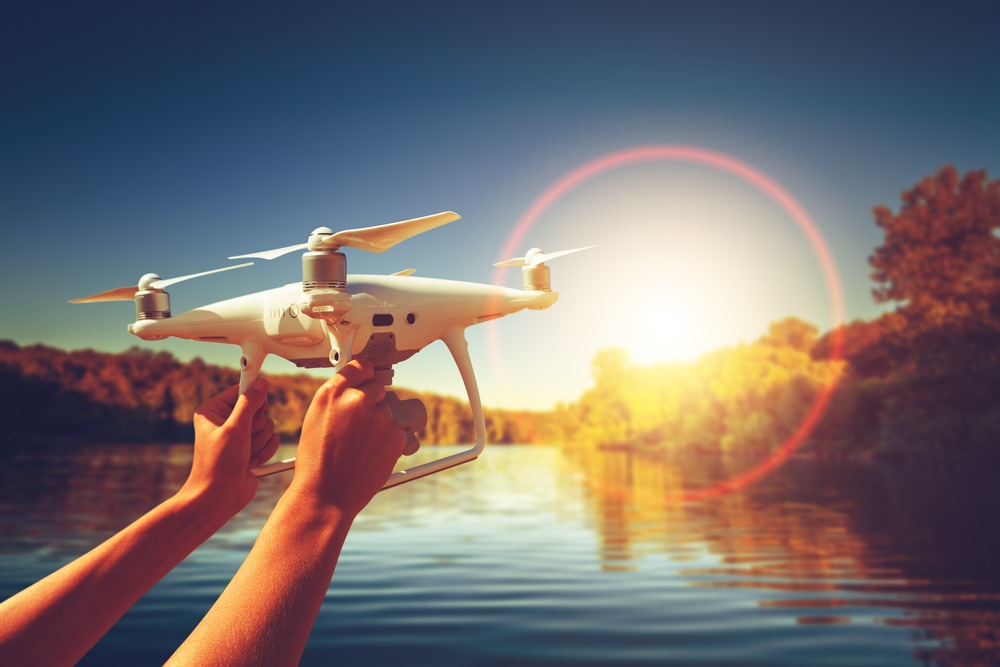 Lots of people ask questions about flying drones in cold weather, but for some reason, when it comes to hot weather, this doesn’t get a lot of questions and it should because flying in that type of environment has it’s own dangers that I’ll get into in this article.

It’s actually just as likely that issues can happen as when it gets cold and you need to understand the dangers of flying you drone in hot conditions and ways to prevent potential issues from happening.

So first, here are the 2 major dangers of flying drones in hot weather:

These are the most common dangers you’ll experience:

1) The first danger posed is to the batteries themselves.

Overheating is a REAL issue that can happen.

On their own, batteries warm up normally when they are used, but when you add warm weather or are flying in areas where the sun is shining right on the model, it will absolutely raise the temperature of them, causing them to drain faster or worse, malfunction to the point you won’t be able to use them anymore, and you don’t have that type of situation happening mid flight (drone crashes can absolutely occur because of this)!

Even in cold weather, batteries are affected too, but the risk is bigger in hot weather environments for the battery (See drone battery care tips here).

2) The second danger is to the model itself.

There isn’t much technology out there that can withstand extreme weather, be it warm or cold and drones are certainly not on that list. Keeping them exposed to the sun or in places like a car while in the middle of a warm summer day can really pose some huge risks.

Let’s not forget things like the trunk or a car, a garage or something similar. These places are saunas for drones (or even death traps).

Ok, so these 2 dangers are the most common/obvious. But what can you do?

Well the easiest solution is to avoid these types of environments altogether but for many people, especially travelers who those in places where this cannot be avoided, I want to show you 10 tips for helping mitigate these dangers when you have no other choices.

So here’s 10 safety tips for handling drones in hot temperatures:

1) Don’t keep your drone in places where it’s likely to overheat, whether it’s on or off.

Batteries tend to not just overheat, but they can actually expand and cause damage to the drone if they are kept in hot areas for too long. You DON’T want this to happen. If this scenario takes place, you are risking the life of BOTH the battery and drone at the same time. Just DON’T make it more likely to happen by being irresponsible and leaving it in places where this can happen.

2) Try not to fly when the day is at it’s hottest or the sun is shining right on the drone.

Your drone would basically be a bulls eye for heat problems to take place if you did. Now for people who often fly, this kind of convenience isn’t always available, but if you have to do this, don’t do it for a long period of time. Try to fly around for a few minutes, take the shots you want as quickly as possible and return home.

3) Fly when it’s early out or getting close to sunset.

These periods generally are a lot cooler than during the mid part of the day when it’s guaranteed to be hot. Flying earlier or later in this case means a 10 or even 20 degree temperature change and believe me, that has a VASTLY positive effect on your drone’s health, including it’s battery.

300 fans may look at this as a pun, but hey I had to say it. Flying in the shade means flying in cooler temperatures, so try to do that if you can.

5) Monitor your drone’s temperature if that option is available.

DJI models for example have this awesome capability where you can monitor what temperature your drone is at in real time. If it bypasses say 40 degrees Celsius for example, it’s time to come back and let it cool down.

6) When you decide to come back and switch batteries, let the drone cool down.

If it’s hot out and it comes back, you better believe it’s going to be hot too. Let it cool down for 15-20 minutes before using the next battery to fly with. This applies to both the model AND the battery. By the way, you also need to know that drone batteries have their own care tips to consider.

7) If you choose to recharge a battery after it’s flown in warm temperatures, let it cool down too.

NEVER instantly recharge a battery right after it’s been used. Let it cool down for the same 15-20 minutes before plugging it in.

8) Don’t try to cool down the battery or drone by placing it in a freezer or aiming an AC right on it.

Rapid changes in temperature can cause damage to the model if you do this, let it cool down in warm/cool environments naturally before using it again.

9) If you’re traveling and it’s too hot to leave your model in the car, take it with you.

This may be a hassle, but it beats having a broken model to worry about. I’ve had to do this on hikes where I parked my car right out in the sun and had to decided on whether or not to take my model with me. Leaving it inside the car meant leaving it in hot temperatures and potentially having it stolen. And leaving it in the trunk just raised the odds that it would overheat anyway, so the safest bet was to take it with me.

In these cases, if you have large models like a Phantom, use this kind of backpack (Manfrotto), it’ll make it more comfortable to carry. Small models like the Mavic Pro have these convenient cases specifically made for the Mavic Pro you can use.

10) When flying in areas like the beach, consider the above 9 things and more.

The beach is another layer of things to consider when it comes to safety (water among other dangers). Not only are the main dangers present, but you’re also looking at issues like sand and interrupting people’s private time. Since hot weather and beaches go together, it’s often the case that people fly in those areas so if you’re one of the many doing this, here’s extra tips specifically for the beach to consider.

And I also say this because I have a trip coming up when flying in hot weather and on the beach is going to happen pretty often and I’m taking 4 drones with me, so this is why I came up with this list. I hope it’s going to help you maintain your model’s health!