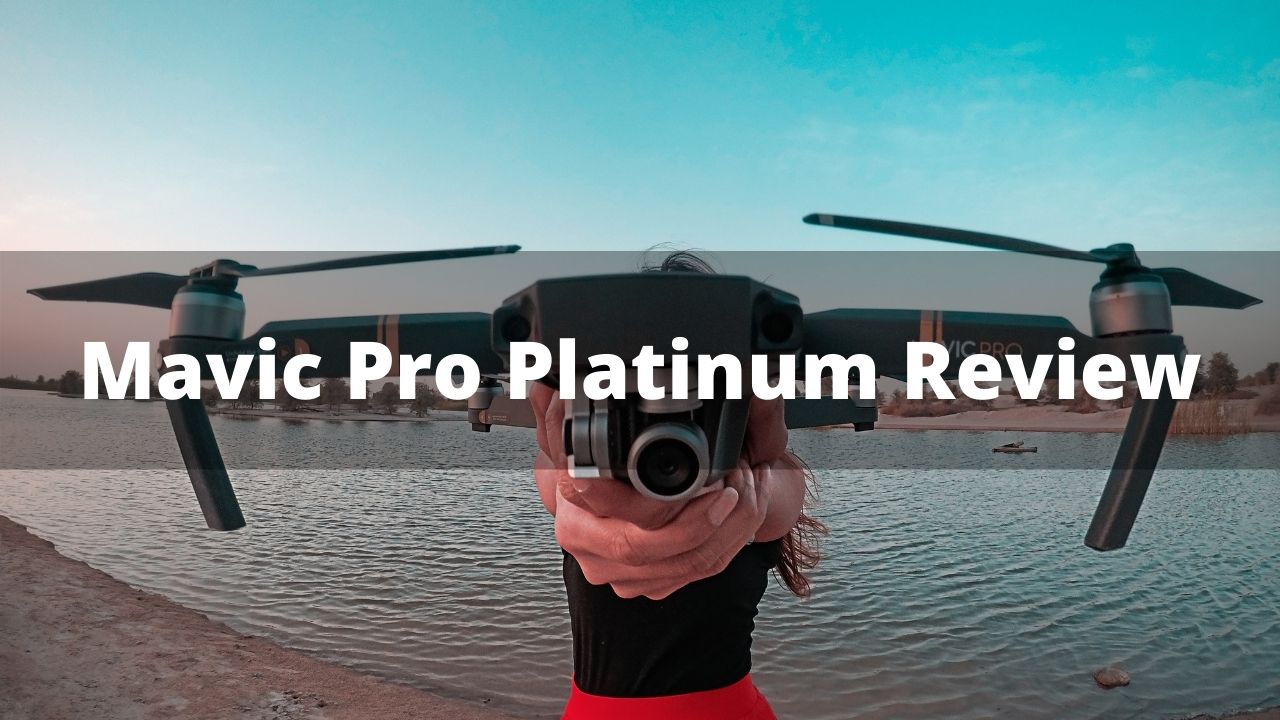 I own a Mavic Pro (original) and when the platinum was released, it made me consider getting it, but after examining all the details, I decided not to.

There were rumors throughout 2017 that DJI was set to unveil the Mavic Pro 2 somewhere around September. The bad news is that it didn’t happen yet.

Update: It happened in 2018 and I got it, but I’ll mention that later!

The “good news” however is that a “modified” version of the Mavic Pro called the “Platinum” version had come out instead in 2017. How good is it compared to the original drone? Well in this article, we’ll compare both models.

In truth, there is HARDLY any difference and if you already own the regular model like I do, then in my opinion there is very little to no benefit to getting this “upgraded” one because honestly, there aren’t really any major upgrades to talk about. The ones that are such as the propellers, can be purchased separately and clipped onto the original Mavic, but I’ll get into those details shortly.

So what’s really new or different about the Mavic Pro Platinum version? 4 things:

It is obviously, platinum. Supposedly this is supposed to make the drone a bit more “Durable” but the weight of it is completely the same as the original so I fail to see how there’s any durability argument to be made.

If you like the new color, you’ll also like the added word “platinum” on one of the wings.

Ok, so this is what I found to be MOST interesting because these wings are very different from the regular ones and because of this, the drone is much quieter as a result. By DJI’s own report, the drone itself is supposed to be 50%+ quieter than the original and I honestly do not see anything other than the propellers that make this possible.

There are certainly many obvious benefits to having a quieter drone. I personally like those which is one of the reasons I liked the Spark. You can film places and in areas where you’re allowed to film people/animals now with less chances of bothering them.

Honestly, the original Mavic is pretty quiet as well, but 50%+ noise reduction is certainly a HUGE plus so I will personally be testing these new propellers out as soon as they become available.

However, if there is a con to having a quieter drone, it’s that if you may lose sight of it and have a hard time figuring out where on the GPS it is (which can happen in forests and if the GPS is screwy), and you will have to rely on the screen of your phone to see when it gets closer to you in distance and HEAR it to be able to identify which location it’s in.

In all honesty, the original Mavic is so quiet that the benefits of having it be even quieter is a great plus.

I also recommend these Mavic Pro accessories for either the original MP or the Platinum if you own it.

Update: Received the new propellers, read below for what I discovered about them:

3) The flight time (there’s a few more minutes of it).

The original drone’s flight time is at it’s best a little over 25 minutes. The new model is said to get you about 30 minutes. Honestly, given how varied these numbers are (based on weather circumstances), you will at best in my opinion get 2-3 more minutes on the platinum version.

Supposedly this extension in flight time in my opinion has nothing to do with the battery or the model, but again, with the propellers. I also believe that you can use the battery of the platinum version on the original drone.

I say this because the price of both model’s batteries is exactly the same ($89) so why is it so hard to believe that it’s still the same exact battery? Plus, this also adds more weight to the argument that the battery (being the same as the original model’s one) has nothing to do with the extra flight time (so it has to be the propellers).

The base price of the new model is $100 more, but that’s before tax.

So the bottom line is that the only real difference in these drones is:

If you can buy them and put them on the regular Mavic Pro, you should get a longer and quieter flight time. However, DJI’s sales page on the platinum model says there’s a new “ESC” which regulates the propeller power that makes the flight time longer.

I honestly don’t think this is the reason why and will personally be trying out the regular and new propellers to compare how much flight time I get in the future. As of now, both the new model and propellers (as well as batteries) are sold out.

After I get it, if I see that there is little to no change in flight time, then I will admit that the ESC is the bigger factor in the extra flight time, but if not, my original hypothesis will stay the same and it will make it less worth it to buy the new model, especially if people already own the original. I really believe this ESC improvement is minuscule, and perhaps, at best makes a 1% difference in flight time.

In terms of similarities, both the original and platinum drone are about 99% the same:

I’d rather not just screenshot the specs page, so I’ll just summarize what’s EXACTLY the same:

In this review of the original Mavic Pro, I basically list all of it’s positives and negatives. You can absolutely apply that review to this “new” model as well as 99% of it is completely the same.

Should you get the Mavic Pro Platinum model?

If you own the regular Mavic Pro like me, I honestly see no reason to get this. Like I said, it’s literally 99% the same.

And honestly, other than the color and the slightly enhanced ESC for “better” flight time, there is no difference. You can literally change the propellers and get 99.9% the same results in terms of extended flight time and more quietness on the regular one.

Like I said before, even if that ESC plays a role in extended flight time, the propellers will be the bigger deal here so putting them on the original drone will give you 99.9% the same results in my opinion and luckily, they only cost $10 per pair. An easy investment for any owner of the original or new drone model.

Now if you DON’T own a regular Mavic:

And you like the new color/frame, you can certainly pay up a little more than a $100 and get this one.

If you are absolutely addicted to collecting drones, and another $1,100 means nothing to you, then I suppose you can also get it. For me personally, I’d rather save the $1,100+ for the Mavic Pro 2 when it comes out and/or any future DJI models.

I just don’t see the point in getting this if you already own the original. Like I said, the only thing that I will absolutely get, to test out are the new propellers. That is what interests me most and also added to that, I will also test how much quieter they’ll make my original model. I cannot wait to test this!

I gave the original model 95 out of 100 points and consider it to be an AWESOME drone. I love it.

The platinum in my opinion scores the exact same thing because I feel the only difference maker are the propellers and that’s an external feature that I can buy separately, put on the original one and get the better flight time and a quieter flight like I said before.

The propellers are also not something that is not really part of the new drone, hence if both models are 99.9% the same in their default features (which they are), and the only real change are the external/changeable propellers, then I don’t think there’s any reason why the platinum should be rated higher than the regular one, thus it is also 95 out of 100 points as well. If I ever have an extra $1,100, I may just get it too for collection purposes.

Note: With the release of models like the Mavic 2 Pro and others like the Mavic Mini, the Mavic Air 2 and outside DJI realm models like the Autel Evo 2 Pro, this drone did go down a bit in score, but not for bad reasons. It’s just that these models I just named are better in quality and the next generation versions I would consider getting.

Update: So I finally got the new propellers and tested them. Here’s what I discovered:

Firstly, if you get the propeller, order 2, as each box comes with 2 propellers, I made the foolish mistake of getting 4, oh well, extras never hurt and these ones rock. Ok, so here’s what I learned:

My theory about the extra flight time was HALFWAY true. I actually estimated that my Mavic got an extra minute in flight time using the new propellers. How did I know this?

Well, it’s simple: I looked at the RPM (rotations per minute I suppose?) on the Mavic remote and here’s what surprised me:

What this means is that these new propellers require less power for the Mavic to operate and that puts less stress on the motor and ESC, so basically, this extends the flight time, but only by a minute if not two and of course this will ALWAYS depend on the circumstances (weather, wind conditions, ect…) of your flight.

Second, the propellers are “fatter” than the original ones, and based on their design, they do indeed make the drone sound quieter, but the thing is, if you listen to it, it will only make a big difference, the farther out it flies. When you just lift it off next to you, it’s tough to tell if there’s a big difference in sound, but as it pulls away, you will notice it disappear faster than with the normal propellers. Get the propellers here.

So my theory about the propellers being the big difference in flight time was half right, and indeed the Mavic Pro platinum’s new ESC feature does add to it, but we’re talking ONLY a minute.

Though I didn’t test this (because I don’t have the platinum model), I suspect that if I were to put the REGULAR Mavic Pro propellers on the platinum model, that it would hinder the flight time by 1-2 minutes.

So my position on the platinum model has not changed, it’s only real, major advantage is it’s color. In terms of quality, this model has a minuscule advantage over the regular one, so minuscule that it doesn’t make sense to get it if you already have the regular one and if not, then yes, it’s a good model to have if it’s your FIRST Mavic.