A drone’s maximum range potential always varies because of a multitude of reasons. I’ll explain how to make sure you get the best range out of yours.

When I bought my Mavic Pro, prior to doing so, I had read it can reach a flight distance of up to 7-8 kilometers. Being extremely excited about this, on my second time using it, I decided to test this out. It flew no further than 2 kilometers and I wondered why this was.

My question led me to discover why exactly many models don’t fly as far as they advertise flying and the truth is that if you do the things I’m going to show you, you will increase your drone’s range potential and likely hit the same distance as the advertisements claim.

You need to know 1 very important thing about drone distance:

The advertised distance potential you see on some of the top models for example are the maximum distances that CAN be reached, but under the PERFECT circumstances that I will talk about shortly.

Most of the time when you fly, there is a lot of “interference” going on that you may not be aware of, but you drone is and it absolutely impacts it’s distance potential on an invisible level that you can only see when the feed you see on your phone or remote starts to act up, but you haven’t gone as far as you wanted to with your model.

Here are some examples of interference that can go on:

-Trees are in between your controller/phone and the drone.

-There are power lines in the way, routers, modems, phones, and they all contribute to the interference and weaken the signal.

-Rocks are also a huge thing. Typically your model’s connection has a harder time reaching through rocks and solid areas like buildings than trees.

– Are you using a 2.4 GHz or a 5.8 GHz connection? A 2.4 will reach further out, while a 5.8 will be shorter, but more dependable in short areas and places where there’s more interference. Do note that most drone models will not have both these options. Good tier models like the Phantom 4 Pro or the Mavic Pro 2 will though.

– Are you using a phone or remote controller to pilot the drone? A phone will typically provide a shorter range due to it being entirely dependent on the WiFi signal (and other connections/apps interfering) vs a remote which will have a stronger, more centralized signal with the model.

So when you take those common circumstances and go out to fly, you can quickly see just how one or more of them can inhibit your distance tests and in my case, they really did. So do not be surprised if what you see as the advertised range on the model you want to fly is different than when you test it.

What connection does your drone use? Some of them are very flaky while others are very strong. Usually, you’ll have these 3 different connections on the better end models.

Are you in a city? You can expect the most invisible interference to happen near or in cities as there are countless signals interrupting your connection with the drone. The safest thing in these circumstances is to only fly drones with strong connections like a Mavic Pro 2. I would not use something like a Spark in a city, unless it was VERY close to my line of sight. Huge inference areas can cause your drone to go crazy like my Spark did.

OK, so how do we ensure that we get the maximum distance out of our UAV’s? 5 tips:

1) Fly higher for a better transmission between the remote and UAV.

A higher elevated flight typically makes it easier to avoid lower elevation interference from the common things I listed above, including cell phone signals, and that allows for your phone/remote to have a stronger connection with the drone, thus allowing it to fly further.

Of course, keep it at under 400 feet or however high you’re allowed to in your country/region. 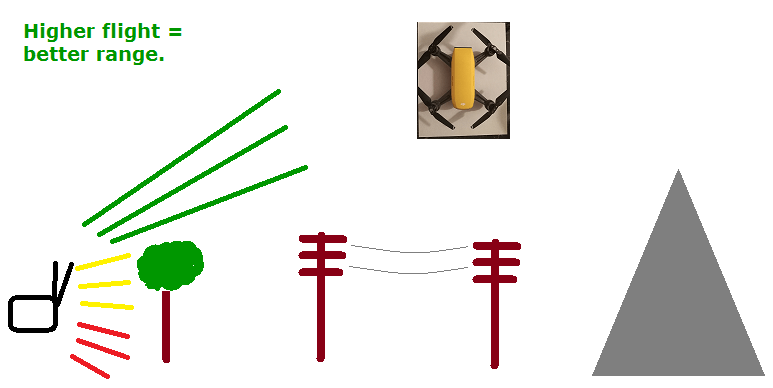 2) Ensure there’s as little if not 0 obstacles between you and your UAV.

Any tree, mountain, person, basically obstacle that can interfere with a clear signal can also interfere with the transmission/distance potential. This adds to an important, ideal tip you will really want to make sure you have:

3) Fly in an open area and in sunny conditions if possible.

Open areas typically have the least likely chances of interference getting in the way of the connection and most of the time when you see range tests on places like YouTube, it’s in open fields.

The furthest flights I’ve seen, including ones that HAVE indeed reached the same limits as the advertised ones you see on big drones like the Phantom for example have been done in open fields.

Also try to make sure the open field you’re in has as many satellite connections as possible, this will only help you get it out further. Satellites can also be harder for your model to connect with if the weather is bad, cloudy or potentially windy.

I briefly mentioned GHz above, but a 2.4 is your ideal connection to use when flying longer distances. Some models have the option of switching from 2.4 to 5.8. Keep it at 2.4 if you wish to fly further. Keep it at 5.8 if you’re flying in a place with a lot of signal interference, like a city (but it’ll fly less further then).

And again, use a remote controller if your model comes with it, not a phone. For example, if you take the DJI Spark model, with the phone you can’t go beyond 50-100 meters, whereas with the remote, you can get over a mile in ideal circumstances. 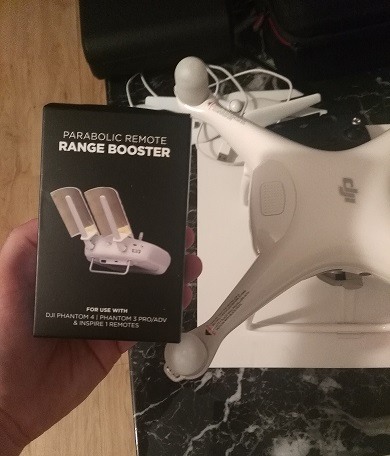 Every major model drone on the market today has accessories like range extenders (modems and routers have these too), made specifically for the model you own.

If you use them, they MAY give you a better connection, BUT honestly, it will play a better role if it’s in an open field.

What range extenders do is they take your remote which normally transmits at a 360 signal and cut it in half to 180, but that 180 signal is twice as strong as the 360 was and when you point the 180 signal towards the drone, it’ll be able to maintain a stronger connection longer and further.

In other words, a regular connection without the extenders is less focused and with extenders included, the connection is MORE focused but in one area.

Here’s an example of these extenders on something like the DJI Phantom.

Other important circumstantial scenarios to keep in mind:

If you apply any of the tips above, you will undoubtedly get a better range from your UAV, but you also keep in mind that your battery life and the weather conditions you fly in also play a big roll (windy conditions for example drain the battery faster). Keep the following things in mind to make sure your model doesn’t go too far out that it risks crashing or not returning fully back if something goes wrong.

If you do one of these range tests and plan on flying ALL the way to the drone’s maximum distance, make sure you have someone waiting at the other end of your model’s projected path so it doesn’t get stolen or land on a stranger’s property.

As of right now, there are 3 drone models with the longest range in this industry:

1) Mavic Pro. The furthest I’ve flown with it so far has been 2 km, but that was with trees in the way and other obstacles. Never the less, that was VERY impressive.

3) Inspire 1 & 2. I don’t own either of these yet, but am saving up for the Inspire 2 in the future (unless a better one gets released).

All of these models have a 7-8 km range and if you’re going to actually get that far, use the tips I talked about 🙂

Update: Mavic Pro 2 currently beats the other models. It has the best known connection in drones, known as ocusync (2.0) and gets a max range of 8 kilometers.

Second to that is the original Mavic Pro and Phantom 4 Pro V2.0, both of which use the original ocusync 1.0 connection.

24 thoughts on “How to Increase Your Drone’s Range Potential. 5 Simple Tips.”