Spoiler: Flying drones at night is dangerous, very dangerous, but a drone can be flown at then, given the right circumstances.

Now depending on the type of model you have and it’s quality as well as how far you fly it. the danger level decreases, but even if you use the best models out there, the likelihood of an accident happening is still very, very high.

Allow me to share an experience of just how dangerous it can be:

On a recent outdoor walk I took with my grandfather, I brought my Mavic Pro with me. I was looking to use the battery up and avoid having it discharge on it’s own (since actively using the battery helps maintain it’s longevity). But my plan fell apart quickly because I didn’t time my walk right.

Basically I though I’d have more daylight remaining to fly the drone, and do the walk, but once we parked the car and I saw how quickly the sun was going down, I knew I had 10-15 minutes tops before night time hit. So I took the drone out and managed to get he first battery discharged pretty quickly while having some decent light.

Now my Mavic was telling me that there was not enough ambient light (natural light) and this wasn’t that big of a deal with the first battery, but once I put in the second, the sun had already set and night time was upon us. So to avoid the risks, while still trying to discharge the second battery, I had the Mavic take flight, but kept it very, very close to myself in case any issue came up, and believe me, there were MANY issues that did. That leads me to explain the following:

How night time flying can lead to disaster even with the best drones out there:

Now there’s quality levels to drones out there and obviously, the lesser quality models don’t have the same flight capabilities, stability, safety features and so on, so having those low tier models fly at night is just a foolish idea and one I would NEVER suggest anyone take.

But the Mavic Pro is not your every day low tier model, it is a TOP tier one. Yet when using it during night time comes into the equation, here’s what it does to even the best of the best:

The Mavic has great safety sensors, yet if there’s no enough light, these things are rendered useless. Hence my idea to keep the drone close to me was indeed a good call, but as you’ll see, it was still very dangerous.

Despite flying my Mavic about 5-10 feet away from my and seeing it clearly, it still drifted in the air, up/down, left right and nearly hit me and trees several times. Though I was able to maintain “OK” control using the remote, drifting was still going on and it was actually confusing me at times. When I wanted it to move one way, but it drifted another, I used another joystick and it actually made it more likely to hit something else.

Basically, instead of having 100% control over the bird, I now had 60-70% and trust me, that itself is dangerous. Would you operate such a model when you didn’t have 100% control? In hindsight, I wouldn’t, these things are meant to be fun to use…

Usually it’s the GPS that allows the bird to remain in one area, but since it wasn’t working fine, this increased the drifting of the bird. And in my case, since I kept it close, there were many obstacles surrounding me that it could have crashed into (and it nearly did).

So let me put it this way. Flying a drone at night, at close range is like driving a sedan in snow (not a good idea) and even if you fly it far and high, it’s like driving with a blindfold (a horrible idea) so basically, this is a very dangerous idea. And if you’re a chart kind of person, this may help explain what I mean: 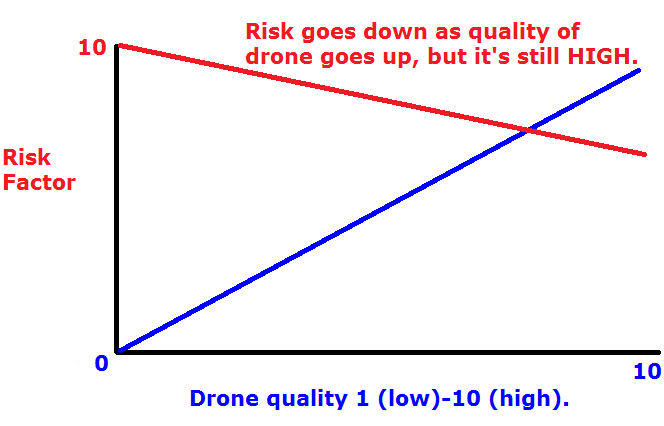 But is there a way to make it work? Well, sort of…

While highly not recommended in general, there is a way to make drone flying “safe” at night and that is having a large area with AMBIENT light readily available for the model to use and have it’s safety features work well.

Let me give you an example of such a thing:

There is another park I sometimes go to where I use my Mavic. In that park, there is a large soccer field that is well lit at night. I have gone on several occasions when it was dark out to that soccer field and have flown my Mavic successfully.

Because it is well lit there, the ambient light is plentiful and used by the Mavic to stabilize itself, have it’s sensors working fine and overall, the flight is as good as it would be during the day.

However, as soon as the Mavic flew away from the field and basically too far from the ambient light to be in plentiful amounts, the red lights started popping up on my screen and the sensors started screwing up.

By keeping it in the field or close enough for the ambient light to be used, I could maintain a safe flight.

Now in addition to that, not far from that field was a highway and not only did the flight remain safe, but I was also able to view the highway and all the lights and details of the cars, so if you’re into taking pictures then, under the type of circumstance I listed, it’s possible.

Although my advice would be to avoid it, if you’re the type who likes to take these types of shots, make sure you have a good source of light available, otherwise, you’re flying blind, period and you’re going to quite possibly lose/break your drone.

Sometimes the BEST shots are the ones you can take right during a sunset and at night, so if you’re going to risk this, make sure to do it early. During a sunset, arrive way before it even starts to happen so should the drone give you errors, you’ll have time to bring it back safely before it gets too dark.

And if you’re going to risk it fully and go when it’s dark, do so when there’s a good, large source of ambient light, but at the same time, do what you can to make sure there are no people around and it’s legal to fly there.

If you decide to use a drone like mine (I typically fly DJI models), here is what you should look for on your screen for the conditions to be “right” to fly at night:

In the following image, I turned off the lights in my apartment to indicate the warning messages and lights to look out for:

So if this is same type of warnings you get, move to a different location, do NOT take off. Trust me, you’ll be happy you didn’t…

But as soon as I turned on some lights, the warnings changed:

If your area is lit enough and the red light turns white (as indicated on the top right hand corner), you are “good to go”, but still only take off if you’re a good pilot.

Update: These 3 drone models may fly well at night.

Mavic 2 Pro and Zoom. Both are the exact same model, except with a different camera, but both have a special light on it’s belly that turns on whenever it tries to land at night. Also if you do plan to risk flying with either of these models, make sure there is ambient light somewhere to allow the camera to use it.

Mavic 2 Enterprise. This model is literally the same exact body as the Mavic 2 Pro and Zoom but the functions this drone has are entirely different. It is meant to help assist with search and rescue operations, especially at night. It actually has a thermal/night vision camera designed to help it fly at night, but this isn’t exactly a drone meant for filming, but rather, saving. Yet as far as I know, it is also a consumer model, meaning people can buy it.

Either way, if you choose to fly ANY drone model at night, I do believe as of 2019, the FAA (if you’re in the U.S) requires you attach a blinker/lume cube to it, which would allow people, planes and helicopters to see it from a distance, at night.

8 thoughts on “Flying Drones at Night. Is it Safe or Dangerous?”