Folks, it’s finally here. I am a HUGE drone fan, own 4 DJI models and have digested many hours of research through video reviews, blogs, the DJI site, you name it in trying to decide on whether or not I should get the new Mavic Pro 2 and in the end, I took the plunge and ordered it (I decided not to get the Zoom version though and I’ll explain why later).

Having gathered a ton of information on this new model which ultimately led me to buying it, I’d like to, in this review, help you decide if this drone is the right choice for you (there’s a 99% chance it is), or if you should go with the Zoom.

Note: First I will take a look at the Mavic Pro 2 (the one I got). Underneath that will be the official review of the Mavic Zoom.

So if you’re stuck on which one to buy, I recommend reading this from the top down. If you want the Zoom more than the MP 2, just skip the initial review and head to the next one.

Stats And Info on Product: 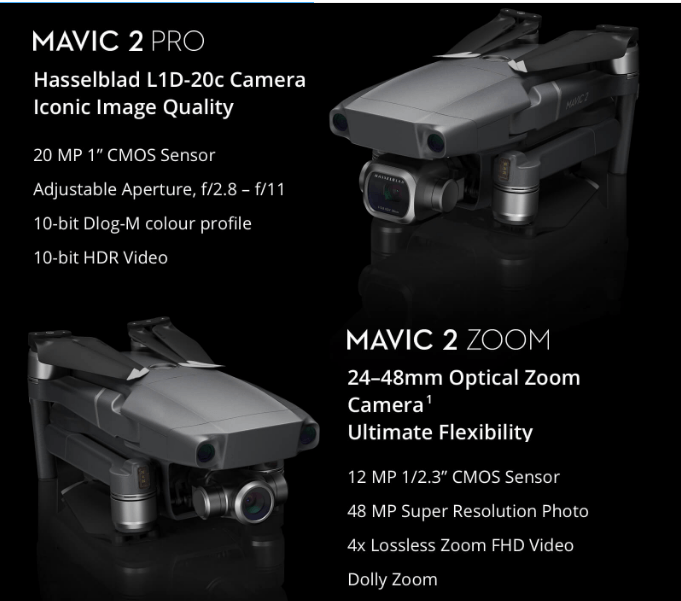 Flight time: 31 minutes for both models.

Size: It is SLIGHTLY larger than the Mavic Pro (still very portable though).

Here is the direct DJI link to both models.

Sensors? Yes both models have 6 (360 degree) sensors, BUT they are not always active (I’ll explain).

Basically the MP 2 has a better camera and the Zoom’s camera is almost identical to the first MP camera, but has more picture taking features (including an actual Zoom). 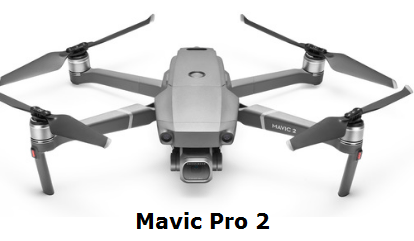 As of right now and probably until the beginning of 2019, it appears to be so. There was speculation that the Autel Evo or the Mavic Air could have claimed that title (at least my titles ;)), but with all the sensors, all the flight features, the flight time, the range, the actual 1 inch sensor camera with 20 megapixels by the way, I think it’s safe to say the MP 2 is the new king.

I will be doing separate comparison between the MP 2 to the Autel Evo, the P4P, the MA an the original MP in other articles, but for now, let’s center this review around the MP2 and it’s most standout features:

1) Let’s take a look at the camera. The best in the market? Yep.

A 1 inch sensor on a portable drone is a first in the industry and it means it’s the best in the market so far. Add to it 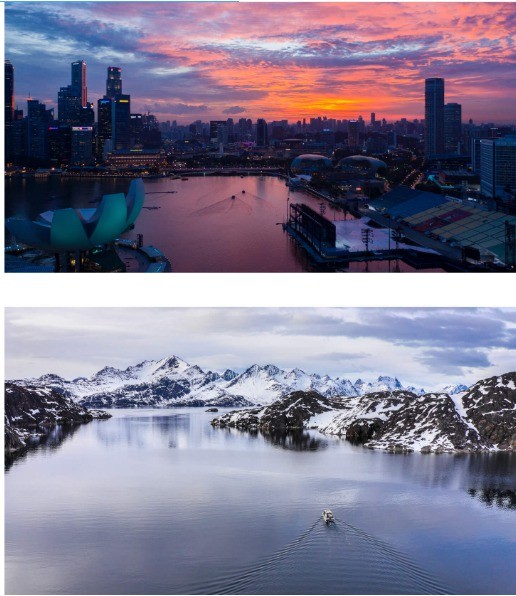 the 20 megapixel camera, and you basically have the equivalent of a Phantom 4 Advanced (or Pro) filming machine in a smaller size.

This is something I also said regarding the Autel Evo, until I saw the comparison footage and felt the P4P was still better. Also the new camera is of the Hassleblad camera, which to be honest, I know very little about (it’s considered top tier in camera companies).

While I am a bit disappointed the camera can’t shoot 4K in 60 FPS like the Autel Evo or Phantom 4 Pro could, the fact of the matter is that it’s not really a big deal as the footage you take on video will still be crispy as it is (also there’s a 100 mpbs so that basically makes up for the lack of the 60 FPS in my opinion).

Now an additional thing on this model is that the camera can actually point up. I will admit that I didn’t know but the original MP actually had this option too, which could be enabled, the MP 2 however has it set up so you don’t need to turn it on.

But in any case, this upward filming feature basically makes the filming potential almost as good as the Parrot ANAFI (another comparison I will do at a later time). The only difference is, the ANAFI camera can point up more and the MP 2 shoots and films better.

See more footage from both this drone and the Zoom here.

2) LED lights installed on the drone.

The front (red) lights are now in LED and there is also an additional LED light you can turn on, on the belly of the drone to help it land in areas where there’s little light. This can be activated manually or automatically depending on the light situation around the drone and ensuring it lands safely.

No portable or consumer drone today (well not until this one came out) has 6 sensors and infrared sensors on it. The ONLY one is the Inspire 2 and that’s considered to be a professional level model. But now there’s we can this to the list too.

Now this is very important…

Do you remember how I said earlier that the sensors are not always active? Well here’s what I meant…

Basically in normal flight mode, the SIDE sensors aren’t active (infrared sensors are) meaning, the drone will give you beeps but not stop if it’s moving on one side against an obstacle. BUT it does have 4 safety, collision “proof” sensors (front, back, bottom and TOP).

However, once you activate one of the many intelligent flight modes this model has, THEN you will have all 6 areas act as safety sensors.

To be honest, I don’t know why they did this, but having a drone have sensors at the top of it and on the side, even while in my opinion it’s not ideal, is still better than any other model I’ve had so far (Well actually my Phantom 4 Pro also has sensors at it’s side).

But yeah, keep this in sensor thing in mind guys, it’s important.

Also: This new model is apparently even better as sensing water and avoiding it, something which previous models did not have to the same level. In fact, one of the reasons people dislike flying their drone over water was due to this problem. I’ve personally never had a problem with that, but I still keep it on the safe side and never get too close to it when I fly.

From the initial reviews I’ve seen, the advertised 30 minutes plus is more like 25 minutes and up, but either way, it’s plenty (for me at least). Basically the thing flies longer than any other portable drone on the market today.

I have talked extensively about my experiences with the original MP and how it’s ocusync technology is hands down the most reliable connection on a drone I’ve ever flown with. Even in the worst, most transmission interfering areas, I’ve gotten at least 1-2 kilometers out of it and in open areas, well you already know how much better it is there.

But to have that awesome technology upgrade to the next stage and be on the Mavic Pro 2 and to extend the MAX range from 7 to 8 kilometers (5 miles) makes the MP 2, despite my disbelief even better.

6) Updates to the remote.

The remote is basically the same exact frame as the one on the original MP, in that it’s the same size, has the same type of screen which shows you flight info, but the difference is that it has removable joysticks like on the Mavic Air and there is also a button to the side of the drone which has the regular, sport AND tripod mode buttons on it.

While 720 on earlier models was good, a 1080, high definition transmission will make flying it in greater distances and seeing what the drone sees even better.

Out of my 4 drones, the Mavic Pro is without a doubt the most stable of the bunch and this new MP 2 is even better in that regard. This will allow pilots to have better, safer control over it.

This new drone has been noted to be 5-10 DB quieter than the original MP, but about 1-2 DB louder than the MP Platinum. Either way, it’s still a generally quiet drone model and the ESC as well as battery life allow for the almost 30 minutes of flight time (in ideal conditions).

10) More intelligence all around.

It has an upgrades APAS system which helps it avoid obstacles while still flying, it’s follow functions have improved and overall, the intelligent flight features are crispier. Pretty much, this drone is far more reliable in helping you get that best shot than ever before.

I don’t know about you, but personally, this new model makes all my previous ones obsolete. Though I’m not going to sell them, when I go traveling, I won’t need to have multiple ones with me anymore. From now, this is the only one coming with me.

Click here to get your hands on this drone.

Note: DJI has made buying this drone a lot easier with their Affirm payment option. That is actually what I used to buy this drone. I simply pay in installments. Learn more about Affirm here.

Everything in both models is exactly the same except the camera, that is literally the only difference.

Now onto the review of the Mavic Zoom: 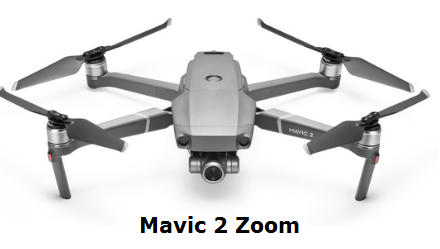 Since everything but the actual camera is the same, I don’t think there’s any need for me to explain the other drone features all over again, so let me just focus on the camera:

This is not the same quality camera as you’d get on the MP 2. Instead of a 1 inch sensor, it is a 1/2.3 inch sensor which does unfortunately man it shoots a little bit less well.

However, the “crowning” achievement of this model is 2 things:

My initial opinion of the Zoom is that it’s camera is very similar to the MP 1 camera, but with more features. Plus with the actual drone being superior in just about every way, that’s one way to look at the Zoom.

Note: As I said above, you can also buy this drone using the “Affirm” feature DJI has had. Check it out here, you can own this drone by simply paying in monthly installments instead of the full price.

Which drone should I get?

If you have never owned the original Mavic Pro, I’d get either the Zoom or MP 2 depending on your budget.

If you have owned a MP before, get the MP 2 as the Zoom is basically the same in camera functions and with an overall better drone.

My personal choice is the Mavic Pro 2. And I cannot wait to get it!

Prior to the release of these 2 models, one of the biggest speculations and ideas going around was that this new drone would have interchangeable lenses and frankly, I would have loved to see that. Let’s say you purchased a Zoom and wanted to upgrade the camera OR perhaps you purchased the Mavic Pro 2 and wanted the benefits of the Zoom’s camera.

Should you just buy another model or can you change the cameras on the drone? Well as of right now, the answer to that is that you can send the drone to DJI, request it and they’ll make the change for you (it’ll cost something). Whether or not it’ll be possible for the consumer to manually do this themselves in the future is up in the air, but I hope that it will be possible.

So just know that there is assurance in whichever drone you buy, that changing cameras is possible.

4 thoughts on “Mavic 2 Pro And Mavic Zoom. My Initial Review.”