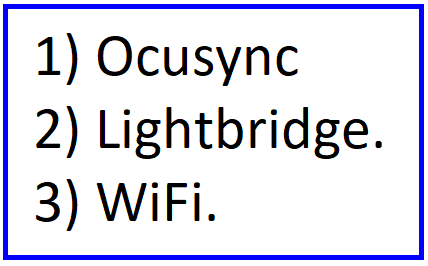 How far a drone can fly is often determined by the type of connection it has to the remote/phone and there’s really 3 that are out there: Ocusync, Lightbridge and enhanced Wifi.

Most drones use a type of Wifi connection, while others for example in the DJI lineup use lightbridge or ocusync.

Well in this post we’re going to compare these 3 against each other. To the right you will see a hierarchy of connections that are the most reliable:

Now let me say I am little above novice level when it comes to understanding connection types like these.

I know about the difference between a 2.4GHz and 5.8GHz connection and which is better to use and I have also had enough experience with my drones to see which of the 3 connections is best (and worst), so I will share the info I gathered:

The 3 drone connections ranked from top to bottom:

I have found that drones with this connection behave best in terms of signal distance and less chances of losing connection.

For example, the following drone models have the ocusync connection in one form or another:

In fact there is a pretty strong consensus in the drone world that if they have an ocusync connection, they will have the best range/connection.

This is the next best thing and it is no joke. Some of the most elite level drones in DJI’s arsenal have this technology, including the Inspire 2 and Phantom 4 Pro (although the V2.0 has Ocusync on it, which is considered an upgrade).

This is the last and technically worst. You will often find the connection here breaks up far often and travels less. In fact, this is the option you have not just on DJI drones but on most models out there, including none DJI ones.

Example: Both the DJI Spark and the Mavic Air use this as well as the Mavic Mini.

But there are exceptions. For instance, the Autel Evo 2 uses a Wifi connection, but it’s so potent that it challenges even the best drones with ocusync connections above and it can get a range of up to 9 kilometers with it.

Ok, so let’s define each of these drone connections:

Let’s once again start from the strongest connection (ocusync):

So basically all these fancy names are really just a form of connection type. With regards to this one, you have one of the longest range potentials between your drone and remote when it uses ocusync. The Mavic Pro for example can hit 7 KM (here is how to increase the drone’s range).

In addition, the signal is STRONGER and more resilient even when there are a lot of obstacles in the way. And in addition to that, the display on your phone produces a higher resolution picture with this on.

So this is second strongest signal you can have and in fact, when it comes to range potential, if you take a drone such as the Phantom 4 Pro (not the 2.0), which uses lightbridge, it can also travel up to 7 KM. However, the signal is more open to connection interference.

While there’s different types of WiFi connections, in this context, your drone has it’s own WiFi channel which you can connect with via phone or remote. Now if you do it via phone, you are on the lowest frequency and have the lowest range potential as a result. This is why if you use a phone to control your drone, you probably won’t go beyond a 100 feet with it.

Now if you elect to use a remote, that signal widens a lot more and the distance increases substantially. For example, if you use a Spark, with the phone, you’d get about 100-200 feet, whereas with a remote, you can get up to 2KM.

Now even though having a remote increases the quality of the signal and the range, it is far more easier to break up. For example, if you have a lot of trees between you and your drone and are using WiFi, you are likely to get a signal loss or at least a weak signal message.

Now let’s compare the signals against each other:

Obviously, we already know ocusync is the best, but sometimes you’ll get tests with these connections that show different results. Here is how I compare the various drone connections against one another:

While both signals are very high tier and can get you 7-8KM if you use the highest level models, ocusync is actually more reliable. I can personally vouch for this as I compared the distance potential between my Mavic Pro and Phantom 4 Pro numerous times.

I stood in a park, in a small open field and flew my drones in the same direction, where between myself and the mode, there were a lot of trees and a lot of obstacles. I was able to get 2 kilometers with my Mavic Pro and about 1-1.5 KM on the Phantom 4 Pro and this happened pretty much every time.

Another example: Just today, I flew over open water with both my Phantom 4 Pro (which has lightbridge), and then my Mavic Pro 1 (which has ocusync).

The Phantom 4 Pro only made it out about 700 meters before telling me the signal was lost and I kept changing the connection from 5.8 GHz to 2.4 GHz, but to no avail, 700 was the limit.

Then I flew my Mavic Pro in the same direction, and went to almost 2,000 meters with a clear signal the entire time (no interruption in the connection whatsoever). The only reason I didn’t fly further was because I was worried my battery life would run out before I could fly back. So there you have it, with this connection, I was able to fly almost 3 times as far under the same conditions.

No question, the former is better, far better. You can go way further, get a clear picture and smoother connection in general when using ocusync. WiFi doesn’t exactly suck, but you would see it’s limits when you compare it to the other.

Again, WiFi has pretty much little to nothing on the other signal.

One of DJI’s recent new releases, the Phantom 4 Pro V2.0 is well known to now use ocusync technology and this allows it to connect to the DJI Goggles without a wire as well as provide a smoother connection. Speaking from personal experience, I’ve only used the Goggles on my Mavic Pro and I’ve been pretty happy with it.

The future of these signals:

I think it’s safe to say that ocusync is going to be the main signal drones use moving forward, particularly the top ones in the industry. It just makes sense as it’s benefits are clearly above the other options. In the years following the Mavic Pro 1 release, which was the first drone to use this type of signal, the drones following that one would improve upon that and get released with a 2.0 or 3.0 ocusync connection.

Do note that while these signals do have their different benefits, you don’t really get a “say” in which one you get with the current models out. If you get a Spark or Mavic Air, you’re stuck with WiFi. If you go with a Mavic Pro or Phantom 4 Pro V2.0, well then, you’ve got the best signal to play around with.

But in any case, all DJI drones are so good that you will usually be able to fly them pretty far (well maybe not with the Spark). You should always try to fly within eyesight and if you do that, any of these connections will suffice. Personally I prefer ocusync because I’ve had the best experiences with it and the longest distance flights.