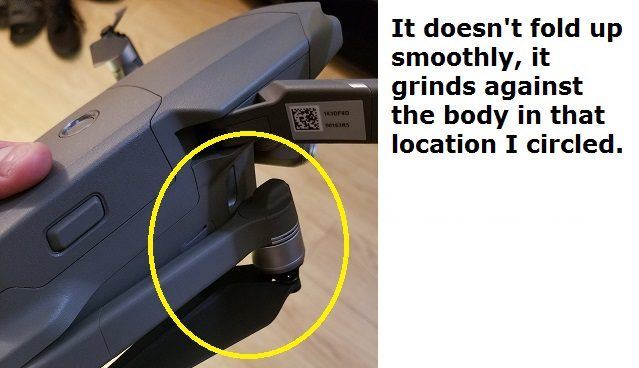 With every new drone that comes out, there are inevitably bugs that show up. In the case of the Mavic Pro 2, being an owner of it, I have personally noticed 3 things I have seen, which while frustrating, have solutions.

It’s also very likely if you own this model too, you’re probably going to see the same thing (comment below if so). Either way, there are solutions to most of these these bugs and I will go over them. The good news is that there will be firmware updates after DJI gets feedback on these issues and they will be fixed as time goes along, but here are the 3 most common bugs I have found in my experience with the Mavic Pro 2 as have others:

When using the return to home option, the very first time I tested it, the drone didn’t land anywhere close from where it originally took off from (it landed about 1-2 yards away, not acceptable!). And yes, I did set the return to home point before take off.

So I decided to run a third test, flew the drone and used the same return to home button on the phone screen again, expecting it to work, but it didn’t, and once again, the precision landing was WAY off. Clearly this is a bug that needs a firmware update to solve. So don’t worry fellow Mavic 2 Pro users, you’re not the only ones having this issue and it will be fixed.

To date, the most precise drone that lands well is the original Mavic Pro. I have a strong feeling the second generation will be just as good when they fix this bug.

2) Did DJI screw up the wing folding mechanism?

When I first got my Mavic Pro 2 and unfolded it, I was very happy with how awesome it felt holding it in my hand and how it looked. Then I folded it up and felt/noticed something strange. The back wings were rubbing against the drone:

I immediately became flustered and thought, how could I spent nearly $1,500 on a drone that is scratching itself with it’s own wings!? So I took out my frustration in the DJI forums and asked if anyone else had the same problem…

Apparently, they did and it’s not even a problem, it’s NORMAL. Here’s the forum post.

Furthermore, I took to and emailed DJI support to comment on this and here was their response:

After seeing this response and the responses from other people in the forums, I actually calmed down a little bit.

You may be one of the many people who upon starting up the drone and trying to update it’s firmware for the first time encountered a specific problem, that being that no matter what you were trying to do, the firmware update just wouldn’t go through because of the following error:

Now you may be thinking: “Vitaliy, you’re a fool, just reconnect to a WiFi, since that’s what the error message says to do” and I would say, I tried, about 50 times, but to no avail.

This error was present no matter what I tried doing in troubleshooting and it was very, very frustrating guys. I was even considering just returning my drone, but I have to admit, I was just very tired the night this all happened for other reasons and this frustration just made me overreact.

But there was/is a solution:

You will need to download the DJI Assistant 2 program to your computer, then hook up the drone to the computer, start the program and then handle the updates from there.

There’s instructions I followed from DJI to do that and it downloaded the firmware fine after that.

I am also 100% sure that DJI will be releasing an update where you won’t get this same error I did, and it’ll be soon, but if you can’t wait, use the DJI Assistant option to get this handled as soon as possible.

In regards to downloading and using this program to update the Mavic 2 Pro firmware, here is a direct tutorial on how:

Like I said, this is what helped me update the drone successfully and I’m sure it’ll be easier moving forward.

Any other bugs worth noting on the Mavic 2 Pro?

Well in my short time with this drone, these are the 3 I found and this is where I’ll ask you guys to tell me if you found others and/or if you can relate to the same ones I listed and if my suggestions helped.

Don’t let these bugs steer you away from the Mavic 2 Pro:

Trust me, I know how frustrating and worrisome it can be when you want to get the newest, best drone on the market, only to hear about bugs like these, but believe me, it is normal for new releases to have these problems and throughout a short period, for those problems to handled in the form of firmware updates.

Aside from the body issue I talked about, the other issues will be solved this way and moving forward, I am 100% sure this drone is going to become even more popular. I have a review of the Mavic 2 Pro here, but I still do very much recommend it.

I know from previous experiences with other drones I own, that there were and will be constant firmware updates that try to fix bugs and once an update fixes one, another will come up, that’s just the way high end software like this works.

And if you want more good news, consider that these bugs are nothing compared to other companies whose drones had even bigger issues. 3 examples:

The Autel Evo had a huge issue with having iPhones work with it’s controller. It also had a MASSIVE problem with the horizon being VERY tilted and it took a long time for it to be fixed. This all happened after it’s initial release.

The Autel Evo 2 Pro. It’s been several months since I got it and there’s constant bugs and fixes being released. It’s even more annoying than the Mavic 2 Pro by far! But I have hope they’ll figure it out.

The the GoPro Karma was probably the worst of all drone issues I ever heard, it’s first generation model had a battery defect where it would fall out and if it happened while in the sky, bye bye drone, and potentially a lot of people could have gotten hurt. A mass recall happened to this drone before the next one came out that fixed it.

So yeah, in comparison to these things, the issues DJI has are minimal, but I want to know what you think.