I’ve flown my drone near beaches and found that while you can get great footage, that it comes with it’s own risks worth knowing about beforehand.

Because if you don’t, there’s a good likelihood that your model can be damaged. In about a month I will be traveling to a place where shooting footage on the beach is a must (Florida), but before I do, I’m going to make sure I have these 5 safety tips down, ones which I recommend you also consider:

Tip 1: Know if the beach you’re flying on is actually safe to fly in.

There are a lot of no fly zones for drones these days so knowing whether or not your chosen beach is safe or not is a must. Download an app like Air Map to know this stuff. Very often, it’ll tell you if there’s any restrictions in your area and/or if you need to contact the FAA for permission.

The areas I’m going to for example have a lot of airports near them, and while I did see that my areas are 5 miles or more out (considered safe), I also saw some restrictions nevertheless on the Air Map app. This safety tip is one of the most important I can give you.

While many good drones out there such as the Mavic or Phantom 4 Pro are VERY wind resistant, the problem with 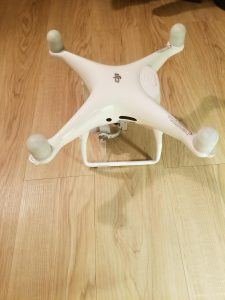 beaches and high winds is that sand is everywhere and the last thing I want is for it to get into the vents or motors.

I personally would not recommend using your model in this condition. Wait it out, it’ll be worth it. Also should you encounter a situation where it’s not windy and you are about to take the drone out and suddenly it becomes windy, make sure you at least have these motor plugs protecting your motors. They’ll make sure NOTHING gets in.

But even more importantly, just keep your model in its case when you get onto the beach and analyze the situation carefully before proceeding to fly.

Tip 3: Don’t rely on landing it on the ground, catch it with your hands (if you’re experienced).

I really don’t like the idea of my expensive drone, landing on sand.

With it’s powerful propellers, you can bet that it’ll make a lot of wind and cause a lot of sand to fly around near it. So when I am ready to land it, I’ll make sure to catch it. This will help me avoid the potential for sand getting in.

And by the way, this tip also applies to take off as well. If you can use your hands to do it, do it. Or at least find a place away from the beach where there’s no sand to lift off in.

And while it’s also dangerous to catch a drone with your hands if you’re not experienced, make sure you practice first beforehand. Or at least land the drone away from the sand on land if you’re worried about getting cut.

Tip 4: Stay close to shore or at least in it’s vicinity.

I’ve made an article before on range tests and that beaches are sometimes the best places to do it because there’s a lot of open space, very little signal interruption and if you look at many of the range tests done on YouTube for example for the various models out there, they are on beaches.

But anyway, whether or not that is the purpose of your flight, my advice is to always stay close enough to shore or land for that matter so that if something happens, you can at least land on…actual land. Issues over water are the last place you want issues to actually happen…

So take those beautiful shots, fly over the water, but just do it so that you know you can come back to shore anytime without issues.

Tip 5: Try not to stay too close to the water.

Waves and the sea are unpredictable. Unless the water is so calm and there’s no storm or wind in sight/feeling, don’t stay too close to the water. You never know if a fish may pop up or some other sea animal may think of it as prey or accidentally jump into it. Its rare for this to happen, but why risk it if you have an expensive drone anyway?

And if your drone does get water damage, depending on what kind it is, will determine if you ever get to fly it again (Salt water is something you never want to get on or INTO your drone).

Do not fly next to or close to or film people, especially those who are trying to relax and enjoy a good time. How would you like it if you were trying to relax and someone was flying their loud drone close or over you? Or what if the wind from the propeller was making sand get on them? That’s just rude and something you could be arrested for or start trouble from. Just stay away from people unless it’s yourself or a friend who knows you’re filming doing it.

In addition, since animals like seagulls are often present there, avoid them as well. I understand the curiosity to film birds, but their way of flying can be unpredictable and you don’t want to hurt a bird or your drone, so if you’re going to film them, stay out of their range.

Enjoy the experience. Beaches are often one of the most beautiful places to film in. You can record wildlife/sea life (from a distance). Imagine taking shots of dolphins or whales and other sea life.

Imagine filming the clear water. Imagine filming a beautiful sunset or even a storm (in the distance!). There’s so many things you could do with your drone in these areas worth trying out. But remember, be responsible about this stuff. A responsible pilot is the one that everyone should strive to be. It will help create less restrictive laws since they are that today because of irresponsible pilots…