When it comes down to elite level drones under $2,000, it doesn’t get any better than the Mavic Pro or the Phantom 4 Pro (as of 2017), both of which belong to the DJI brand.

Update: 2 years since I wrote this comparison, the Mavic 2 Pro came out (and yes I have it too) and I will be comparing it to both these drones, but for now, if you’re in the market for either a first generation Mavic Pro and/or a Phantom 4, the remainder of this article still applies:

Now onto the 2 drones in this comparison. I happily own both models and have flown each extensively, more than enough to make an accurate comparison/recommendation for anyone who is on a budget, and wants to know if one or the other is the right choice for them.

Although in an ideal world, if you can afford it, I would recommend both models to you, there are differences in which one model is superior to the other and vice versa. Now depending on how you plan to use one of these drones will inevitably determine which of the models is better for you, but this is something you’ll be able to understand as you read the following comparison.

Let me personally admit that I am extremely happy with both of these models. Though I got the Mavic Pro prior to the P4P, I loved it so much, and began exploring more models out there, that only “next level” option to go with was in fact the P4P.

As you may or may not know, the Phantom series has a lot of different models, stemming from the 1st, all the way to the 4 series. Within the 4 series, there’s actually 5 models, with the Pro and Pro+ and V2.0 being in the highest level (here is a full review of each). Below that are the standard and regular Phantom 4 model.

While this comparison focuses on the P4P (Phantom 4 Pro), in case you are wondering what my position is on the other, lesser versions of it, compared to the MP, here is the quick summary:

The regular P4 vs the MP. The camera is very similar, but my experiences really have led me to conclude the Mavic’s is better, even though it’s substantially smaller. Flying capabilities are pretty similar, but the edge goes to the MP because of it’s portability and also the range is superior.

I rated the regular P4 80 out of 100 stars and the Mavic Pro with 95 stars based on this assessment.

I rated the standard P4 90 stars out of 100. Still the MP gets a slight edge because of it’s overall capabilities.

Then we have the P4P, my model, aka the one we’ll be focusing the majority of this comparison with…

Just as a summary, the camera is exactly the same as the standard P4 advanced/standard, so that already makes it better than the MP. With flight capabilities, there are way more, meaning in most cases, you’ll get higher speeds, more safer flights and an overall, better experience.

But now, let’s examine specifics…Where the P4P beats the MP:

1) On paper, the camera is nearly twice as good on the P4P, but is that really the case?

Here are the stats:

While those are the basic, initial stats, the P4P has more superiority in terms of lens size, shutter speed, ISO ranges and more. In short, it’s superior, period.

While there is a noticeable difference between the footage (photo and video) that you can capture on both drones, and the P4P does look better, and SHARPER without question, the MP is not far behind, believe me. Despite the stats being being a huge favor for the Phantom, here is how I would grade it:

And if you don’t believe those numbers, here is comparison footage (photo/video). One very important thing I want to draw your attention to is how the details in each photo and how similar it is when it’s closer:

The following objects in the picture above are about 5 feet away from the drone/s and when you get into the details, there’s very little to complain about on either. They both shoot close up objects and details exceptionally well.

Now let’s compare outside photos. The following is actually a screenshot of a video of nature. I would like to ask you to focus on the deeper parts of the road and see where there’s more details shown:

It’s pretty close, but the Phantom gets a slight advantage since the image itself is less blurry. Let’s try another, and this time test out how much detail each drone can capture when you’re filming something far out:

Now if nothing else, this above image alone shows where the Phantom is vastly superior to the Mavic. Now I’m not entirely sure I had the focus used on the MP during that shot, but without a doubt, as you expand further out, the Phantom is better at capturing details from a distance.

I definitely have my own subjective view on this stuff, but I strongly believe there isn’t as big of a difference between both drone’s photo/video capability as the “on paper” stats suggest, at least not when you’re trying to capture nearby footage. As you expand outward, it becomes a different story and the P4P shines far more. But without a doubt, if you’re aiming for a better camera in general, the P4P is the better choice.

But do NOT discount the MP and it’s camera, it’s still fantastic. Here’s some extra reasons why: 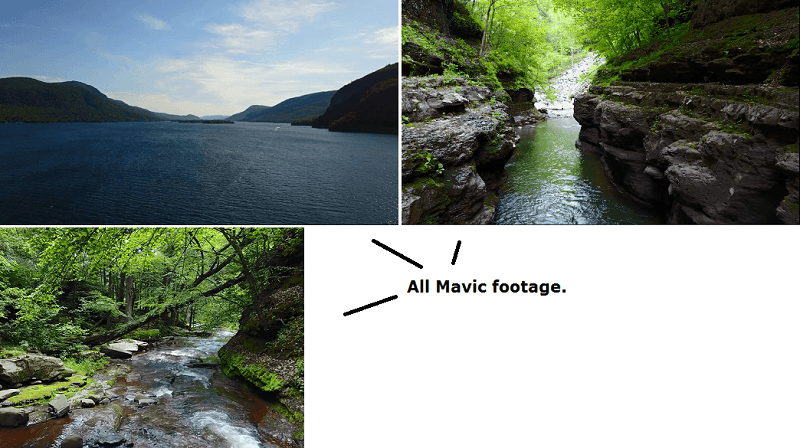 If those types of images satisfy you, then you should definitely be happy with a MP.

2) The P4P is more durable and powerful.

No question there. It’s heavier and more protected. The wings on the MP expand out, whereas the Phantom’s are attached to the body, it’s basically one whole unit. That makes it more durable should a crash occur.

Now in terms of power, it has to be more powerful because of it’s heavier size and need to perform at a high level.

In terms of top speeds, the P4P can get about 40 mph on normal mode and 55 mph on sport mode.

3) It flies slightly longer in the air (up to 5 min more in my experiments).

On paper, the MP can get about 27 min of flight time, the P4P can get 30. My experiments show that generally, there is slightly more flight time on the P4P than Mavic.

Note: There is actually a MP Platinum out right now which also gets 30 minutes of flight time. But I’m referring to the regular, original model which I own.

There is a little hole on one side of it that makes it easy to do. With the Mavic, it’s always been annoying as there’s a little latch you have to pull open to get the SD card in. Being that I bite my nails, I lack the nail power to do this, so I use a plastic butter knife each time.

5) More sensors. But that’s only on the P4 Pro version.

The regular P4 and P4 advanced only have 2 sensors, just like the MP. The P4P however has 5 in total and that makes it a safer flight.

Should you encounter an issue where connection is lost, the P4P is better at flying back to you with those sensors up and running. But this isn’t really an issue if there are no obstacles between the drone and you. If there are, the P4 will do a better job.

This really irritates me about the MP, but there’s a feature where it doesn’t auto focus and you have to tap the screen to do it. The P4P does not have this issue.

And it is an issue because sometimes I forget to touch the screen on the MP and then I later see a more blurred image, where if I didn’t forget to do it and tapped the screen, it would look great.

I’ve gotten better about remembering to do it, but it’s an inconvenience, one that the P4P, thankfully does not have.

1) Most importantly, the portability has to be mentioned…

With a drone that folds up and is twice as small as the P4P when it does, you’d better believe it’s easier to carry, set up, store and bring with you on trips. The hassle of carrying a big Phantom on your back does start to feel bad after awhile.

You don’t even need to clip on wings. They are always attached to it, whereas on the P4P, you will always have to attach them.

2) Surprisingly, it is more stable in the air/against the wind than the P4P.

All logic would say otherwise, but I’m not the only one who has drawn this conclusion. With every experiment I’ve done where both the P4P and Mavic were out on the same day, be it normal, or windy, I am still shocked that the Mavic has more stability in those conditions than the Phantom.

In short, it is more still and stable overall.

3) No doubt, it is the safer one to use in tight shots.

Tight shots being this:

Size here plays a big role in safety and odds your drone won’t crash or clip something.

Now this varies on the type of P4 you decide to get, but here is the quick comparison:

By that I mean it’s substantially more quiet, especially if you get the quiet propellers.

Areas where they are even:

7-8 km on both models BUT Mavic Pro gets better range against the original P4P model because it uses ocusync and P4P uses lightbridge (connections explained).

HOWEVER, with the upgrade of the Phantom to V2.0, it also switched to using the same ocusync connection, thus making it superior now (only that version though).

3) Both drones are simply amazing.

I love both models.

In case you’re wondering why the P4, despite being advantageous in more areas, is still rated the same, the answer is that it’s advantages are slight in most cases compared to the Mavic. Let’s examine it:

The only real stand out is the camera and sensors (considering it’s the P4P that you get). But despite those advantages, I did mention the word SLIGHT for a reason…

And the advantages the Mavic holds on the P4P are more considerate, especially the portability and cheaper price. And being that it’s camera is not too far off from the P4 camera, I will say the advantages between both models cancel each other out and it’s why I rated them similarly. But here’s a quick look: 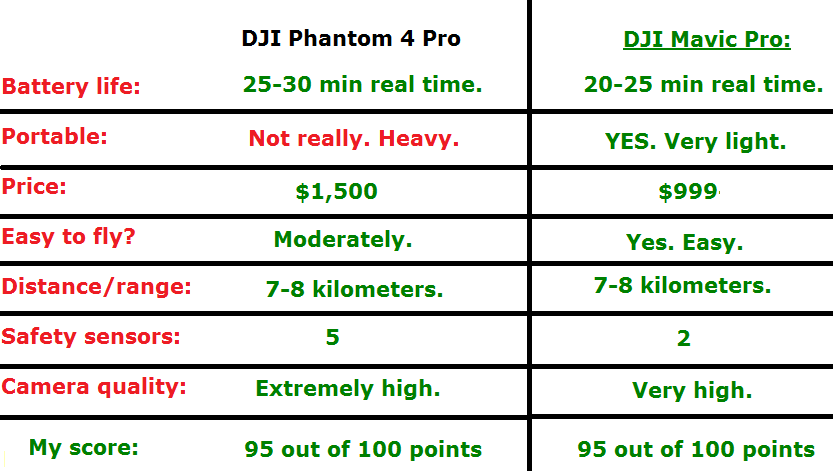 No doubt, if you’re on a bigger budget and want the best model you can get, stick with the P4P. But honestly, you will NOT be disappointed by the MP, it’s very high up there as well. And if money is the issue, you will obviously save more on the Mavic and maintain a high quality image/video as well as flying experience.

Both models in my personal view deserve their excellent score and I would not travel to any place without both. Unless that place was wide open, I’d use the P4P. If it was more tight and dangerous to shoot, I’d use the Mavic.