I’ve had close calls with my Mavic Pro since I fly it in some risky areas and every single time something bad came close to happening, my heart would beat profusely.

Luckily, because I was flying it in those areas slowly, I was able to stabilize the drone and the situation and thus avoid the nightmare of losing my favorite drone.

As you become more and more experienced with flying, close calls are going to happen, and one thing I’ve personally done to try and remedy that future problem is investing in propeller guards, specifically designed for my Mavic Pro: 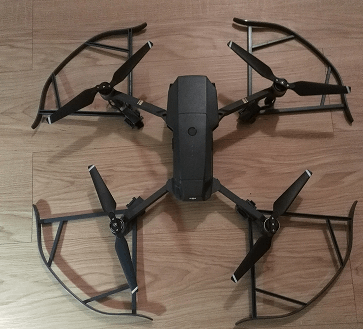 However, prior to getting them, I had looked through a bunch of reviews of people who also tried them and in most cases, they are either bad or halfway decent, meaning people don’t necessarily like them, but they don’t recommend NOT getting them.

But nevertheless, I decided to get them anyway, to give at least some sort of assurance I’d be protected in case the next close call happens and I’m not prepared.

Here are my 2 (good) takeaways from this accessory:

1) They indeed do provide some important protection. Only good for risky flying.

Specifically they protect the actual propellers. If these things hit something hard, it’s game over, the drone won’t stand a chance. Nothing made that clearer for me than when I almost crashed into a small canyon wall pictured here:

Had I not been flying slowly, my drone would be deep in the water and possibly screwed completely. Yet if I had the propeller guards set up during THAT specific flight, they would be the first to hit that canyon wall, ensuring the propellers themselves would not be hurt, and thus that would keep my drone in flight and safe.

The next time I do one of those risky flights again, I will absolutely have them on. So the takeaway here (and this is possibly the only real positive one) is that for risky flights, I would recommend you get these things, especially if you’re flying in more tighter areas.

Also, while the Mavic Pro has great connection (ocusync), there are places where it can screw up (metal areas, or high interference zones).

While this is RARE with this model, should you be in a tight spot and this connection issue hits and the drone starts flying everywhere, having that extra propeller guard protection may be what saves it from a crash (I learned about this issue from my Spark).

It may take an extra minute of set up time, but they aren’t that big of a deal to put on. This only becomes a problem if you have to put them on and take them off multiple times that it can get annoying.

Everything else is not so good…

1) Despite being light, they can add bad weight to the drone…

The Mavic is a powerful drone, and even when it has the safety propellers on, it will still fly fine, especially with the model I use, but that’s considering you don’t have the following conditions occurring the flight:

Wind and lots of it.

The second you have wind added to the equation, the thing that makes the Mavic Pro safe to fly may very well become a nuisance and huge risk factor because as the wind tilts the drone and it tries to maintain stability (which it’s amazing at), the propellers WILL add extra stress and weight to the drone, making it have to exert more energy to maintain that stability.

While the following may not be the best analogy, I think it will do a good job of explaining what I mean:

Think of boats that has sails. They don’t weight a lot, but extend them out fully, add a little or a bit of wind and suddenly they can pull/push the entire boat. If you don’t direct them carefully, they can be trouble.

Though the propeller guards on the Mavic aren’t sails, they can do enough, with enough wind to make flying the drone more dangerous, so if you’re going to use these things on a windy day, don’t…

2) They make the drone look uglier and less portable.

If aesthetic looks is what you want to see on your drone, I doubt these things will make it look prettier. One of the things that makes the Mavic, specifically a GREAT drone is that it’s small and portable. Having these accessories on would make it’s wing span larger than that of a Phantom 4 Pro so obviously, it’ll negate portability.

Specifically to the sides. Should you fly underneath a tree or hover over something else, these accessories would be useless. Although thankfully, there are sensors for the bottom, you can’t always depend on them.

Basically the protection is only for a limited area, and although it is an important limited area, it’s something you need to understand. There is no FULL protection of the drone, that’s literally impossible. The best way to protect it is to fly it safely and use common sense tips.

Honestly, if you’re going to fly the Mavic in an open field, forget getting this accessory, it will serve no purpose because there’s nothing to protect it from. An open field is one of the safest places you can fly your drone in.

Given everything that’s been said, is it still worth getting these things?

Only if you plan on flying it in the types of areas I showed. And honestly, to add to it, I would say get them for that unlikely scenario. You may find yourself driving around, filming areas like I do and a improvised, beautiful area pops up that you’ll want to film and if that area is a risky one to fly in, having those accessories on hand would add some insurance to the picture.

They aren’t expensive to get, but something that should be kept around in a scenario where they would be perfect for. But if you aren’t that type of flier, you really need not worry about this. Be a safe, responsible flier and if possible, keep the drone in your eyesight so you can make quick decisions, to ensure it’s safely flying and not crashing or bumping into anything that may cause it to crash.

While in my situation, I will rarely use the propeller guards, I will still carry them with me on my trips, just in case…

2 thoughts on “Mavic Pro Propeller Guards Review. Do You Really Need Them?”