Hey folks, so there’s a common problem among drone pilots who use phones to see what their model’s camera sees and that is that the image transmission is often weak, non-existent, lags like crazy and/or there’s some crazy green, pink and/or blurry lines all over the screen.

Here is an example, this is what the transmission from the drone showed on my phone screen: 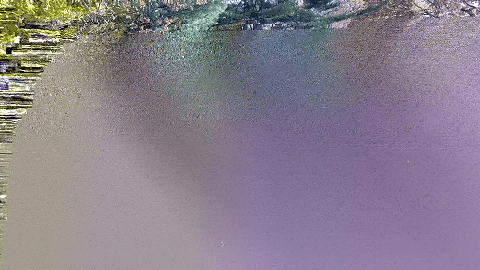 If you encounter this before you fly, it’s certainly annoying but as long as you fly within line of sight, at least you’re not running any risk of crashing.

If on the other hand, the problem happens WHILE you’re in flight and not within line of sight, well then, it’s a VERY annoying issue and it can lead to a dangerous flight potentially and one that I’ve had happen a few times on ALL of the DJI models I own:

The P4P, the Mavic Pro and especially the Spark (since it possesses the weakest connection, WiFi).

Throughout the many times I’ve encountered this problem personally, I’ve found numerous ways to deal with it that I would like to share with you today.

Firstly, let me share some great news (It won’t affect your recording):

If you have an image transmission/lag happen on your phone screen, it does NOT impact what the actual camera sees and records.

This means that if you’re trying to take pictures/videos with your drone and what your phone is showing is not a clear screen and you attempt it take the picture/video anyway, then it’s OK, as the final footage recorded onto the SD card will be perfectly fine.

Here is an example:

Secondly, in ALL of the instances that I’ve had this issue, it was never because of the drone, so don’t think that you have some sort of defect model if this happens, at least run it through the solutions I will show you in a moment before escalating the issue to forums and the company which creates the model/s (DJI for example).

And finally, should the issue happen while it’s in flight, do note that it does not impact the actual drone, only what you see it doing. That means you can STILL fly your model just using the remote and it’ll obey even though the phone you use will not show it.

But this will only be a safe solution IF and only if your model is flying within your line of sight. If not, absolutely make sure you set a home point before you take off (and these other safety tips), so if you do lose it somewhere, you’re assured it’ll come back to you.

Here are the 11 solutions to fix the image screen transmission problem:

Note: These solutions are in no particular order, as the REAL issue behind your transmission issue/lag can vary, but run it through one or more of the solutions below if one doesn’t work, move onto the next one and eventually, you will be able to solve it with the various fixes I’ve found…

Now most of the solutions I am providing to you today deal with DJI models, so if you have ANY model from this company, rest assured, these solutions are perfectly fit for you and even if you don’t have a DJI model, the’re pretty common sense steps to take anyway.

Without a doubt, if you search forums on drone problems, one of the most common pieces of advice you’ll get is that your issue is likely due to an inconsistent firmware and will have to update it.

Sometimes this will not show up until a problem (Such as a weak transmission) will show itself. But if you restart your drone and let it load up fully before flying, if there is a necessary firmware update required, it’ll let you know, so make sure you wait to make sure everything is a green light on your controller’s/screen’s end before moving forward.

Now a lot of this is due to the app you use to fly your model. In my case, I use the DJI Go 4 app, which has come down with many issues over the time it’s been released and one that requires constant updates from DJI. There’s always some sort of bug that’s going on unfortunately and one that DJI is constantly trying to fix, so most of the time, it’s the app that’s causing an issue and you need not think it’s your drone.

2) Consider your phone model as the culprit.

DJI models for instance are known to run BEST on the iPhone for example, and many types of android devices, including tablets may not be 100% compatible with the apps/model you use.

My most recent image transmission issue occurred on the Mavic Pro and I was using an android phone (Honor X, yeah…). Now up until the problem arose, I never had problems with the app or the phone I was using to see the footage, but because I was careless with my phone numerous times, dropping it, getting it wet, I suppose the damage added up and this eventually caused the problem I would run into, to occur.

I tried numerous things from the list below, but nothing helped, so the ONLY solution I was left with at the time was to use my grandfather’s new Samsung S6 phone, and once I installed the DJI Go 4 app and ran the Mavic Pro on it, the image was perfect, there was no lag and I knew the solution.

Ever since, I’ve purchased a Samsung S8+ (I don’t like iPhones) but have yet to test it out on my existing 3 models. I have no doubt it’ll work well though.

In only ONE instance did I ever see an iPhone have image problems when connected to a drone, but it was a scenario where I was walking in a park and saw 2 people trying to fly their Mavic Pro for the first time so I don’t know the history behind it other than what they told me, I was just in a hurry to fly my own models so I helped them out as fast as I could to get them up and flying, then went on my way.

But do know for your own reference that iPhone models are generally the “go to” model to use on a drone, especially DJI and with it’s app, the DJI Go 4 app. So if you already own one, you’re likely going to experience clear pictures/videos.

3) Restart the drone, the app, and the remote (All of them).

Sometimes a reset can fix the lag/image issue and I’ve seen this happen before. Now if the transmission issue occurs when you’re in flight and it’s out of sight, if there is no way you can return the drone manually, either:

Hit the return to home button and if that doesn’t work, then restart the app and remote, your image issue might reset and show, allowing you to return the drone safely.

4) At times a manual reconnect to the model/remote is necessary.

If a reset doesn’t work, consider reconnecting your phone/remote to the drone via it’s Bluetooth connection (this can only be done when it’s not in flight). Although most drone models that come with a remote are shipped to you already linked to one another (the remote/model), sometimes, that connection needs to be refreshed with a manual reset/re-connection.

Such a troubleshooting step helped me fix my Spark’s transmission issues which I was getting while I was ONLY 5 feet away from it!

5) Make sure the antennas on your remote are clean.

Random debris from the air may impact your controller and even get the antennas dirty. Make sure they are pointed correctly towards the drone and are clean.

6) Consider distance as a potential issue.

The further out a drone flies = the lesser of a connection you can have and other miscellaneous stuff can impact that. Consider the following troubleshooting steps to fix that and you may clear up the screen problems.

One thing you can do is try to get in front of the drone, so there’s no obstacles between the remote/phone and the model. This will allow the transmission waves to connect better.

7) Consider getting a different wire that connects the controller/phone.

I have heard good reviews about the following one, as it’s supposed to provide a stronger connection and thus 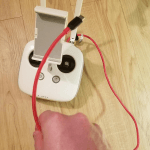 provide a clearer/more dependable image transmission vs the default one that comes with the model and connects the remote to the phone.

I’ve actually ordered one since seeing good reviews on it and will be sure to test it out.

Update: I have received and tried this wire. It is indeed awesome! Now it has replaced all the default wires that came with my drones, I only use this one! It’s great and I haven’t had transmission issues since. Get it here.

Note: It fits ALL drone models. I use it on all 4 of mine.

8) Re calibrate the IMU, Compass and gimbal.

These are 3 important check ups drone users need to do, especially DJI users, this can help correct the problem.

9) Consider putting the phone in airplane mode and/or turning off data.

If you have a phone whose signal is working as your remote’s signal is trying to connect to the drone, it can not only limit the flight distance but also the image quality.

10) Play around with the actual image transmission settings.

There just so happens to be such an option on DJI models and in my case, using these options cleared up my problem. Here’s how it works:

First, let me show you the original, blurry screen: 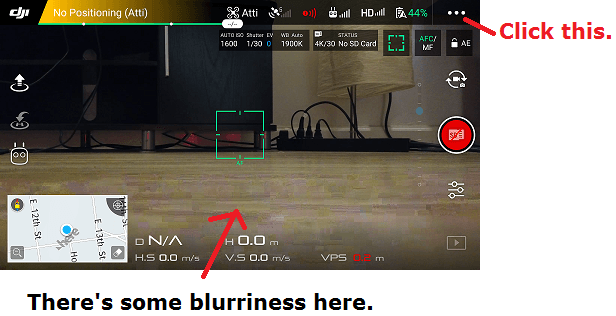 There are “3 dots” at the very top right of the screen here. Click it. Then find this:

Find where it says “HD”, that’s the transmission settings area. And you have several options:

1) You can switch from Auto to manual. Try it and see how it affects the image.

2) I accidentally blurred it out but there is literally an option right underneath the auto, custom one which says “Image Transmission Mode” and it’s by default set to “regular mode”. Touch the “regular mode” and you’ll have 3 options:

I was on regular mode when I had the blurry transmission, when I switched to HD, it cleared up BUT the camera wheel motion had a lag and that caused blurry lines to appear again.

Only when I switched to Smooth Mode did the issue resolve, the screen was fine and there was no lag: 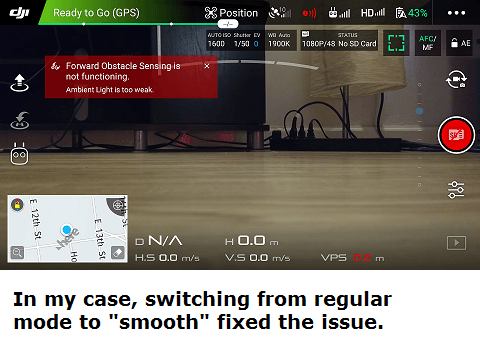 I’ve honestly never known this to work, but doing so may impact the transmission on the phone positively as well. It’s worth a shot if nothing else works.

Did these troubleshooting steps fix the screen problem for you?

If so, then I’m glad it worked! If not, let me know if your issue was fixed and what particular steps you took to get it done.

Also if you have any further steps of your own that helped that you’d like to share, please comment and/or if you wish to add to any of the options above.

8 thoughts on “Having Image Transmission Issues And Lag on Your Drone? The Solutions.”