Let me just say this: Everything you wanted to see improved on the Spark is basically done on the Mavic Air (MA). So its the obvious choice if you can afford it.

You may as well just called it the Spark 2. And the comparison below will show you that. 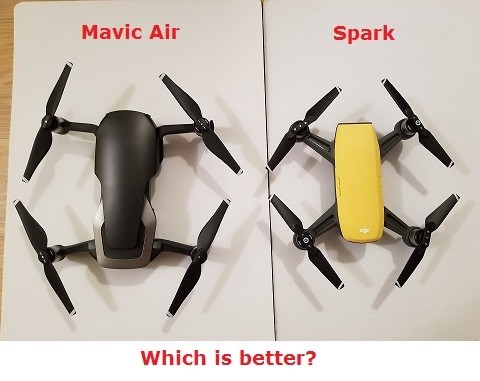 DJI is known to release multiple drones a year, but 2017 was a bit weird in that department. There were no new models, except the Spark being released and a buffed up version of the MP (the platinum version).

Other than that, expectations to see a Mavic 2 and a Phantom 5 were met with disappointment. While the Mavic 2 is out, the Phantom 5 has nothing but rumors surrounding if it’ll ever come out.

However, not long into 2018, DJI appears to be back on track in terms of making/releasing new models and the first is the Mavic Air (MA), a basic middle between the Spark and Pro and I’ve read numerous comments from people who are upset that they got the smaller model because the new MA model is a clear superior to it and only slightly more expensive.

I can somewhat relate as I own one, but come on guys, DJI’s reputation is all about releasing new models quite often, don’t be surprised by this.

But is this new model really that much better? Let’s have a look at these 2 models and examine if those who purchased a Spark or are still thinking of buying it are making the right choice:

The price. The winner is the Spark (but only on the surface).

The price dropped down to $399 (without the remote) and the current base price for the MA model is $799. Obviously a big difference. So if money is the BIG factor for you and you’re tight on it, you know what to get. After all, it is two times less expensive, although I will say this:

Get the controller for it, it’ll make flying it a lot easier but if you go that route, the price will rise to $599 and if that’s the case, you may as well just invest in the Air.

The overall quality. No question here, the MA takes it by a large margin.

Though I’ll detail the specs under this, the summary is this. The MA has…

But now I’ll get to the details:

The camera: MA wins, by a lot.

While I do not mind the camera on the smaller model, the unfortunate fact is that it pales in comparison to the Mavic Air.

In addition to that, the quality of pictures is very noticeable and far more professional looking on the MA, without question.

As for videos, it’s exceptionally better. In addition to having a better camera, you also get 360 camera shooting and a better panoramic picture taking ability.

You’re basically comparing drones that are levels apart on the camera quality and the Air is the higher one. I haven’t done a side by side comparison between the MA and Spark with the camera, BUT I have tested the Spark against the Mavic Pro and the Pro wins by a lot. See more.

I own 3 batteries for my Spark and I’ll tell you, you need at least 2 if you’re going to use it. Consider the added battery as an extra charge on the price and then see if you’re ready to invest in a MA.

4 km range vs 2 km, basically a two times difference. But just like with the flight time, that number is always based on perfect, ideal circumstances which rarely happen if you know anything about flying drones.

More than likely you’ll get about half that range in MOST cases and in good cases, about a 75% of that range potential and that means in any of these likely circumstances, the Air will always be able to fly further. The ability to do this means you can record more better shots from different areas, while standing in one and if you want to add this extra perk, flying longer means you have more fun.

Sensors: MA gets an extra push… 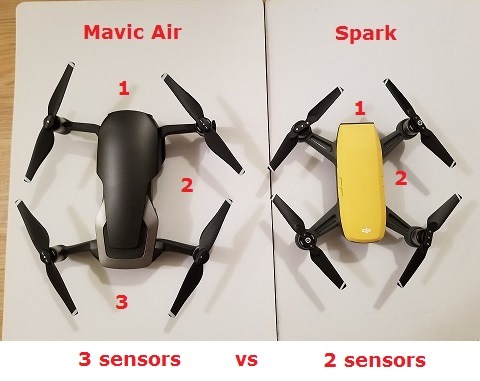 And mainly because it has sensors on the back. Now don’t get me wrong, the sensors on the other one are no joke and I recently saw that when it almost crashed into a tree I couldn’t see on my phone screen because of the reflection of the sun on it, but when it comes down to it, the Air has all of that and more with a backwards sensor, making 3 in total.

When it comes to safety, you already know who wins…

Extra, more advanced sensors means the MA is, at least on paper a safer drone to fly with.

The carrying box. Wow, who would have thought the MA is better again? Have a look: 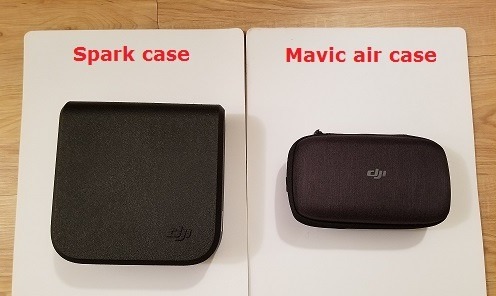 Both boxes which come with each drone ONLY fit the actual drone, but the Spark’s box is almost twice as large as the Mavic Air’s. The MA box looks like a sturdy eyeglass case and you can literally fit it into your pocket. The same cannot be said about the other box…

Obviously this convenience is huge if you’re going to travel and extra space while hiking, driving or traveling never hurt anyone. So that leads into…

Portability. It’s pretty much even. 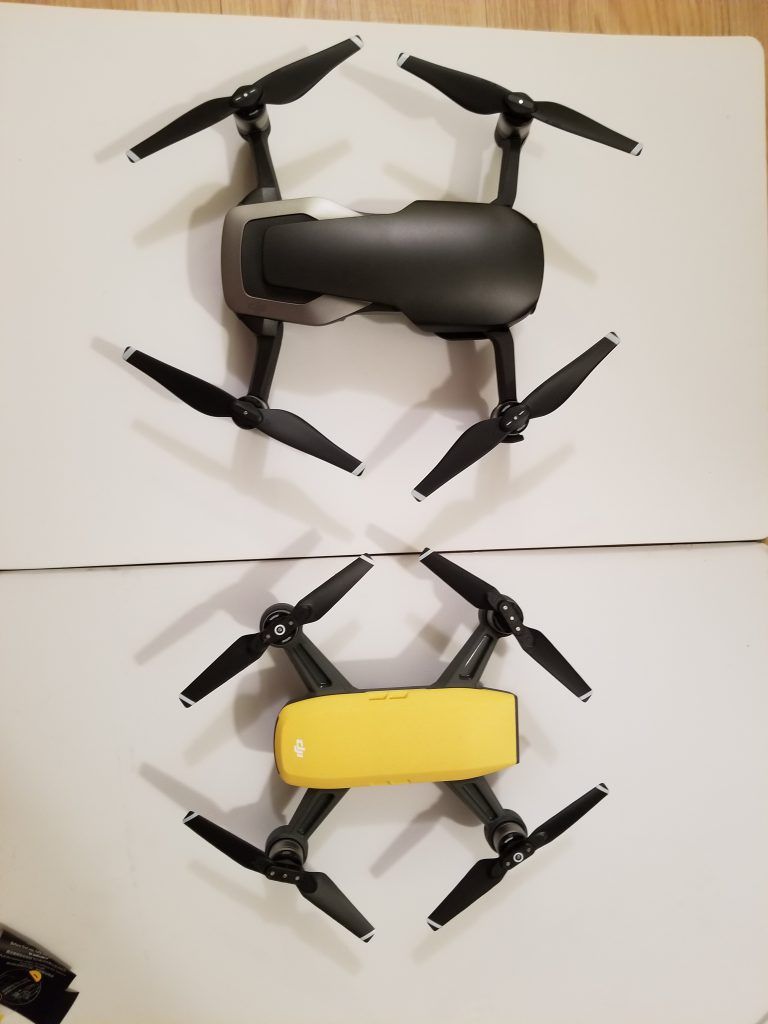 The Spark, while being the smaller model is actually a minuscule measurement here because both of them are so small and fit in your palm that it doesn’t matter what the size is. I mean have another look, it’s not that big of a difference:

Both models are hugely portable (see what I did there?), but it’s when you add the above box for carrying purposes that you see that the MA is just more convenient.

It did take the idea of the palm controls from the other, smaller model, so give credit where it’s due and there’s one important feature it has that the MA doesn’t: Palm landing. The MA does not have it, but it does have palm landing and lift off, as well as making it follow your hand around.

The overall look: MA looks more professional in my opinion.

I think the other, smaller model will always have that reputation for being a beginner drone and/or one for kids and don’t get me wrong, as one who has it, I love it, but when you compare it to the look of the MA, there’s a clear distinction as to which one is better looking.

On normal and sports mode, the MA is way faster and has more control. The other one has a tendency to be tougher to control (if you’re viewing the image transmission, and in sports mode) as it’s camera will bounce around everywhere. It’s still very fun to fly, but that camera bouncing around really messes with my head.

Connection strength is better with the MA:

The connection reliability of a drone is HUGE for safety and with the MA, I am less worried that something will go wrong. The Spark has given me issues on more than one occasion including this recent one. I just believe that the MA is a safer drone.

Ease of flying: Both win.

Both are great and easy to fly with, although understand that these things can fly VERY quickly, especially in sports mode, meaning if you’re in an area with many obstacles, don’t risk it, be in an open field or keep it above any potential obstacles.

These things go from 0-30 and even 40+ mph quite quickly. But I’ll tell you this much, in beginner mode as well as regular, I’ve never had an easier time flying. There’s so much smoothness and control and pretty much anyone can get it right the first time they fly.

You can charge it via a USB cable on the actual drone, from and port and even in your car. With the MA, you cannot do this and are basically relying on the old school way of charging which is with it’s specific charging port it comes with. If you wish to charge it in a car, you’ll need to get a specific charger for that too, it adds an extra expense.

The overall comparison on chart: 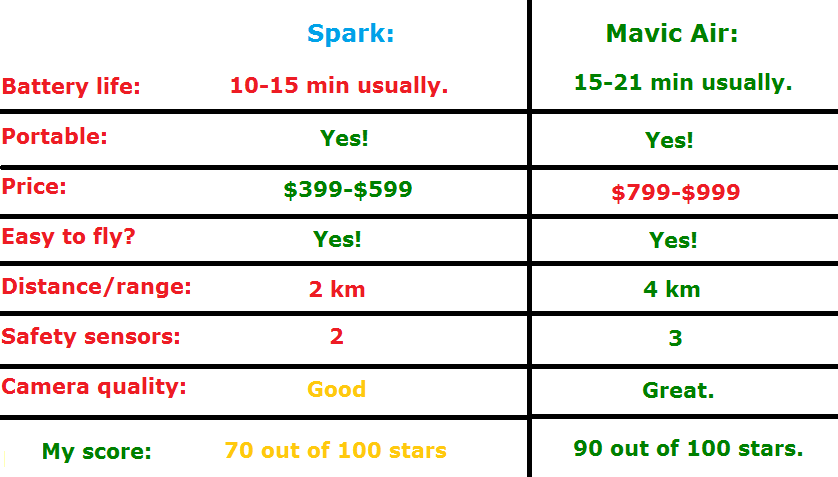 Update: I downgraded the score of BOTH these drones, but the MA is still rated pretty high. Here are the new updated score:

Is there an argument to be made to purchase the cheaper model?

Sure, it’s still a very good drone, but it’s not great. MA really starts that “great” labeling in my opinion and is truly superior to the Spark in every way except the price.

Had I known the MA would be released, I honestly would not have gotten the Spark (I think many feel that way), but I have become a collector of drones, so I guess it would have ended up being all the same anyway…

So if you don’t currently own a Spark and are considering the other one, definitely get it if you can dish out a few more $100, the price difference will be felt at how much better quality of a drone you’ll get and you’ll be very happy with it.

10 thoughts on “Mavic Air vs DJI Spark. There’s Only One Obvious Choice…”